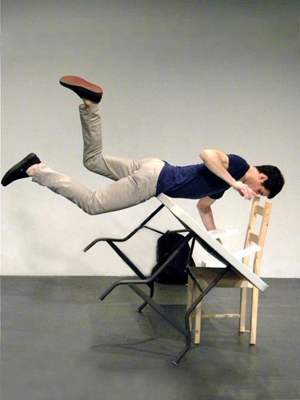 SeXcurity follows disillusioned Daniel, link an Israeli-American gay screenwriter who, when confronted by a paralyzing family crisis, discovers the power of creativity and the resilience of the self in battling the biggest fear of all — New Jersey. Or Death. It’s a matter of perspective.

Inspired by cultural theorist Leo Bersani’s writing on radical intimacy, The Yoga Sutras of Patanjali and the events surrounding the 2010 Gaza flotilla, SeXcurity is a humorous and provocative inquiry into the conundrum of identity.

Written and performed by Yuval Boim
Directed by Darren Katz

“Surprisingly original and exhilarating. Nothing like anything I have ever seen on stage before. Yuval is a master at fusing rusty-edged stories of heart, soul, sex, love and family with extraordinary physical body expression…We were riveted!”
-Kathy Najimy

Other press for Yuval Boim:

Darren Katz (director) is currently Resident Director for THE LION KING on Broadway. He has developed and directed original plays, including YOU SAY TOMATO I SAY SHUT UP by Annabelle Gurwitch and Jeff Kahn (Orin Wolf/OBB, Producer), and I GOT SICK THEN I GOT BETTER by Jenny Allen (co-directed by James Lapine; New York Theatre Workshop, Producer). Current new projects
in development include LIFT UP YOUR SKIRT, written and performed by Kathy Najimy; ELEANOR & HICK by Tom Wilson Weinberg and Peggy Stafford (starring Lea Delaria, Cady Huffman and Mary Testa); THE BOYS UPSTAIRS by Jason Mitchell; and ODI by Beppe Savoni (Caroline Pecoste, Producer). Other directing credits include THE 25TH ANNUAL PUTNAM COUNTY SPELLING BEE (second National Tour), HAPPY SUNSHINE KUNG FU FLOWER (The Zipper Factory), and the development of original shows at Pace University and NYU/Strasberg Studios.