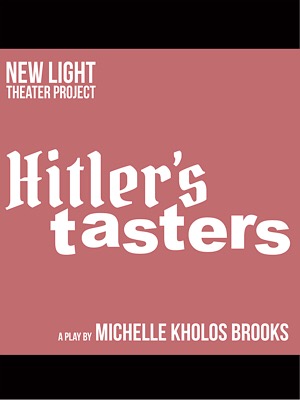 Three times a day, every day, a group of young women have the opportunity to die for their country. They are Adolph Hitler’s food tasters. And what do girls discuss as they wait to see if they will live through another meal?  Like all girls, throughout time, they gossip and dream, they question and dance. Deliberately anachronistic, stretching across time to autocracy today, these young women want to love, laugh, and above all, they want to survive.

Michelle Kholos Brooks (Playwright) is an award-winning playwright with productions staged across the U.S. and Canada. Hostage was selected as a finalist for the 2016/17 Woodward/Newman Drama Award, the Fratti Newman Political Play Contest, and was a 2017 Showcase finalist for the National New Play Network. Hitler’s Tasters, won the 2017 Susan Glaspell Award. Kalamazoo, co-written with Kelly Younger, was the winner of the 2014 Riva Shiner Comedy Award, Bloomington Playwright’s Project. It has been published by Dramatists Play Service and has been produced across the country. Family Planning made its world premier at the Colony Theatre, Los Angeles and was a finalist for the Riva Shriner Comedy Award. Brooks’ play, Chair, won 2nd place in the 2015 Firehouse Theatre Festival of New American Plays. For more information, please visit her website: michellekholosbrooks.com.

Sarah Norris (Director) is the Founding Artistic Director of New Light Theater Project. Her work has been seen both around the country (New York, Los Angeles, Chicago, San Francisco, Fresno, Las Vegas, Minneapolis, Maine & Alaska) and around the world (Australia, England, & Ireland). In New York, she has worked with: Playwrights Horizons, Theatre Communications Group (TCG), LAByrinth Theater Company, Disney Theatrical Productions, 59E59 Theaters, The Flea Theater, Primitive Grace (with Paul Calderon and David Zayas), and The Gallery Players to name a few. She has an MFA in Directing from the University of Nevada, Las Vegas and a BA in Theatre from the University of Alabama, Tuscaloosa. She is the former Artistic Director of Access Theater and a former Associate Producer for the Broadway producing company, Bisno Productions. She is a proud member of AEA, SDC, and serves on the TAC Artistic Board. For more information, please visit: SarahNorris.org