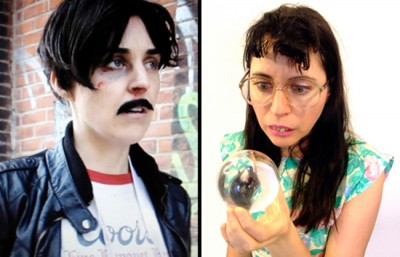 In DARKLING, it’s 1987, and thirteen-year-old Trinity is obsessed with three things: goth figurines, losing her virginity and being just like her troubled older sister. When her sister commits a daring escape from a boarding school for wayward girls, Trinity must decide whether to follow her into fantasy and madness, or remain in the affluent suburban world that drained her mother’s soul. Could there be another choice? A one-girl show about growing up without giving up.

HIP is set in the early aughts, Williamsburg, Brooklyn, ground zero for the modern hipster movement.  Wythe, a struggling musician, is convinced his songs have been co-opted by the increasingly popular buzz-band, The Strokes.  His single-minded quest for fame is diverted by three women who are also longing for their own brand of recognition. In an increasingly self-aggrandizing community, Wythe must decide what is lasting and what is simply–hip. A story for anyone who has ever wanted it so bad, they could practically fake it.

Kim Katzberg (writer/performer) is a NYC based actor and writer. Of her breakout solo show, The New York Times wrote, “Penetrating the Space has a glowing, vulnerable, haunting center.” Penetrating the Space was nominated for two 2012 NYIT Awards and ran at HERE Arts Center in repertory with Tom X. Chao’s Callous Cad. Prior to that, Penetrating… was developed at Dixon Place through two engagements: as an official selection of the 2010 HOT! Festival and in a featured run as a 2010 Artist-In-Residence. Katzberg performed excerpts from her solo show Darkling in CATCH Performance Series at The Bushwick Starr. Most recently she performed a work-in-progress version of Darkling on July 5th and 6th, 2013 at IRT Theater as a 3B Development Series Artist-In-Residence. Off-Broadway productions include Alison in Richard and Anne directed by Anthony Nelson at the Arclight Theatre and Benvolio in Romeo and Juliet directed by Tony Speciale at Classic Stage Company. Katzberg holds a BFA in Theater, NYU/Experimental Theatre Wing and a MFA in Acting, Columbia University. Kim Katzberg is also a drama teacher at Brooklyn Heights Montessori School. www.kimkatzberg.com

“With Darkling Kim Katzberg has created yet another fascinating, artistic, and utterly entertaining showpiece, tailor-made for the adventurous theater goer who revels in daringly unique performances — and in this case, one that could be said to be “beyond the beyond.”
–Culture Catch