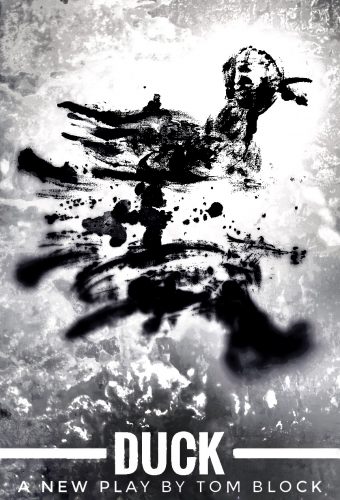 Duck follows the internal struggle of a CIA statistician who learns that 1% can be the difference between life and death. He tries to understand what “loyalty” means — to whom, and at what cost. Under periods of great stress, he loses the ability to speak and instead quacks at people like a duck.

Duck (Billy) has reached the end of his rope and only communicates by quacking. After a career in the CIA, he finds himself on a park bench, which happens to be the home of his older brother Crumb (John), who was also once a CIA operative and Duck’s boss.Crumb lost faith in the system, leaving his younger brother to kill for reasons of state while Crumb, dropped out of society.

In the opening scene, Abbie, who has undergone a personal travail of her own, enters and tries to talk to Duck, who only quacks. However, he will talk to his brother. Abbie is very taken with the injured Duck and tries to befriend him. Crumb tires of the game and drags Duck off the bench to take a voyage through Duck’s past, so he can understand how he found himself there.

Duck sees the man he had killed in Damascus (probably innocent), watches his father (once an eminent neurobiologist, but now decimated with Alzheimer’s disease) euthanized in Rotterdam and even explores his original psychic injuries, as a bullied elementary school student. His brother protected him from exterior threats in that long ago, though bullied him when they were alone together.

We also meet his wife, his journalist biographer (Duck has been awarded an Intelligence Star Award for his work) and see him in therapy.

We end where we began: with Duck, Crumb and Abbie in the play’s “present.” Duck never is able to speak directly with Abbie, but she feels strongly that she can save him from whatever internal war he is going through. They exit together, unable to communicate but somehow bound together, and Crumb is left alone on his bench.

Katrin Hilbe (Director): directs opera and theatre, working both in the US and in Europe. Her Richard Strauss’ SALOME for New Orleans Opera won “Best Opera Production 2012”. She won the Hilton Edwards Award for best direction and adaptation at the Dublin International Gay Theatre Festival. Between 2007-2010 Katrin was the primary Assistant Director for Richard Wagner’s DER RING DES NIBELUNGEN under the direction of Tankred Dorst at the Bayreuth Festival in Germany. http://katrinhilbe.com

Reviewers have said of Tom Block’s plays that they offer “a fascinating and rewarding look at the multiple dimensions of faith, theory, and inspiration” and “if you’d like to explore where theater will be ten years from now, it is probably worth a look.”