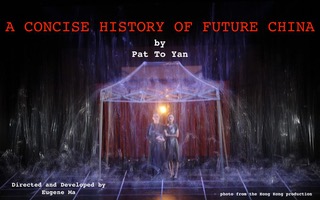 A Staged Reading of “A CONCISE HISTORY OF FUTURE CHINA”

Originally penned in English, while having received its first full production in Hong Kong performed in Cantonese Chinese,  A Concise History of Future China became the first play ever to have been featured in the world-renowned Berliner Festspiele Theatertreffen Stückemarkt by a Chinese playwright in 2016. Playwright Pat To Yan’s text is recalibrated by Drama Desk-nominated theater-maker Eugene Ma in this staged reading.

Let us witness barbarism unfolding in a dream-like asynchrony: A country on the brink of civil war. Two generations, two cities, two opposite journeys. As the entire population of the land is fleeing towards the South, the Outsider struggles to get to the North in order to fulfil his mission. Timelines intermingle. Without anywhere to run or hide, where is our collective history headed?

This event is supported by the proceeds from A WEEKEND OF CLOWN WORKSHOP with Eugene Ma on Saturday, October 28th and Sunday, the 29th from 12-5pm at IRT Theater. No prior acting experience is needed for this class. Please visit HERE for more information.

Pat To Yan was born in 1975 in Hong Kong, where he studied English Literature and Sociology. He encountered and produced new European plays while working as an author and director in Hong Kong. He was a member of the “New Writing Laboratory” which ran a program of developing new writing and organized a large international conference on new playwriting. Since 2014 he has been based in London, where he is enrolled in the M.A. Playwriting program at Royal Holloway University of London and has realized several works as a writer and co-director.