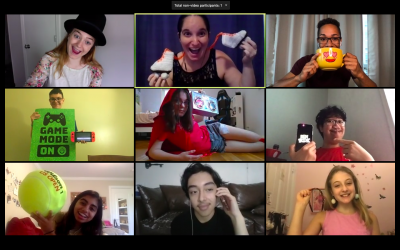 IN RESIDENCE: July 6- 18, 2020
Our Home … a review of ABC Poetry, songs from Broadway and original pieces created by our students exploring and investigating the meaning of Home. Times are changing and things aren’t always what we expect, but it’s important to know we always have a place we can call ‘home’.

HONORARY GUEST TEACHERS:
Sarah J. Hom is Roundabout Theatre Company’s Director of Audience Services. She is passionate about and dedicated to increasing accessibility and inclusion in the arts. Prior to joining Roundabout, she held senior positions with the Denver Center for the Performing Arts and the Colorado Symphony and was Board Chair for Phamaly Theatre Company. When she isn’t sitting inside a theatre (which isn’t often), Sarah also enjoys skiing; particularly with the NSCD in Winter Park, Colorado.