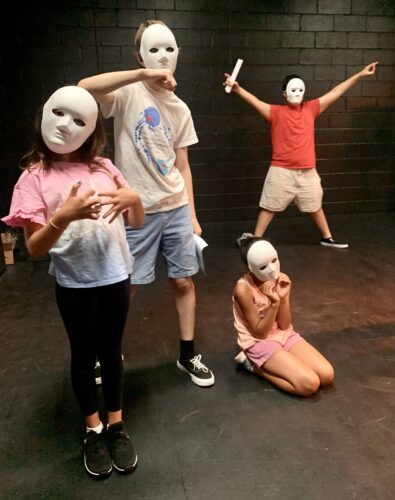 How the Sloth & the Rock Star Became Friends Again

Join a couple of interdimensional tourists on an adventure to a new world, where they meet a cast of characters that teach them about friendship, family and believing in yourself. Based off of students’ improvs and devising activities, this short play incorporates techniques and games that this summer’s cohort has explored as an ensemble.–

Jessica Ranville (she/they) is a theater artist based in NYC. Originally from Winnipeg, Canada, she is part of the Métis Nation of Manitoba. Jessica is an actor and theater artist who has developed new works at The Lark, NY Stage & Film, WP Theater and many more. Credits include the NYC Premier of Stupid F*cking Bird at The Pearl Theatre, Charles Mee’s Soot and Spit at the New Ohio Theater, and Men On Boats at Baltimore Center Stage. Jessica most recently appeared at the New Ohio theater in Songs About Trains with Radical Evolution. Past work at IRT theater includes residences with Our Voices and Blessed Unrest, as well as a solo residency. Jessica teaches movement at Brooklyn College’s BFA program. MFA: The New School for Drama.