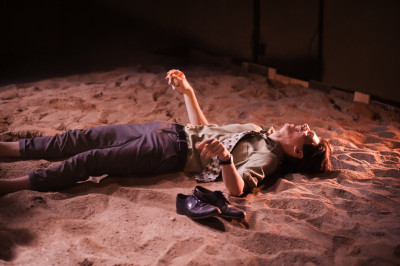 Peter and Bobby graduated from Northwestern together, live together, work together, sleep together. But when one of them cheats with a woman, they dive into a world of wild sexual affairs that threaten what they once had. But through this cycle of destruction and repair, will they find a different kind of love?

Evan F. Caccioppoli (Director) – Evan F. Caccioppoli received a BFA in Theatre Performance from the University of Illinois at Chicago and an MA in Educational Theatre at NYU. He also studied at The Poor School in London, England, and performed at the International Theatre Festival in Varna, Bulgaria. Evan is a proud member of Actors’ Equity Association, SAG/AFTRA, and associate member of the Stage Directors and Choreographers Society.

Sanguine Theatre Company is a small but mighty pioneer for rising artists and new works. Since its founding in New York City in 2010, Sanguine’s work has given NYC debuts to dozens of actors, designers, and playwrights. Sanguine’s mission is to advance the art of American theatre through the spirit of collaboration, making art accessible to everyone.

See below for feedback on the 2012 Chicago premiere of Wild:

“Skillman and director Evan Caccioppoli get two things exactly right: (1) the special ring of hell that is living with someone you’ve broken up with and (2) the fact that long-term love is more than anything an act of determination.” — Time Out Chicago