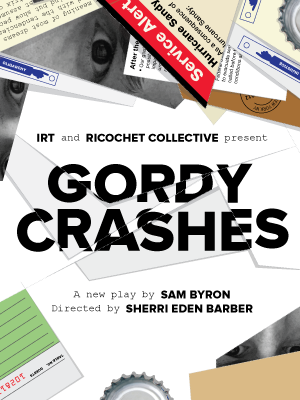 Gordy is having a bad week. Superstorm Sandy has driven him out of his apartment and into a dizzying blur of other people’s couches, bad takeout, alcohol binges, boredom, stories of horrible destruction in the Rockaways, and aimless wandering between Manhattan and Brooklyn which all lands him, delirious and sleep-deprived, on the doorstep of his estranged ex-girlfriend, Mere. Over the next three days, Gordy will see the true extent of the storm’s devastation as his declining mental state steers him into a head-on collision with his own fear and anxiety.

KATE NOLL (Set Designer) Recent credits: Accidental Death of an Anarchist (Yale Rep/Berkeley Rep), The Fatal Eggs and Ermintrude and Esmeralda, both remounted in New York from their original productions at the Yale Cabaret. She designed the set for Cloud Nine and the costumes for House Beast at the Yale School of Drama, as well as various shows at the Yale Cabaret (2011-2014). Resident Set Designer: Yale Summer Cabaret (2013) and Sundance Directors Lab (2009). Kate has also practiced as a studio artist, stylist, and production designer for television and film. MFA, Yale. BFA in Painting from the Rhode Island School of Design.

SERENA WONG (Lighting Designer) is a Brooklyn-based freelance lighting designer for theater and dance. Her designs have been seen at New York Live Arts, Irondale Arts Center, the New Ohio Theater, and the Brick Theater. She is the resident lighting designer for New York Theatre Ballet. She is a wild fermentation enthusiast.

JACOB GRIGOLIA-ROSENBAUM (Fight Choreographer) has worked with Sherri Barber previously on Mr. Landing Takes a Fall and Tapefaces: Legend of a Kung-Fu Master. Broadway: Peter and the Starcatcher, Bloody Bloody Andrew Jackson, Cyrano de Bergerac, On the Twentieth Century. Other credits include: Peter Pan Live (NBC/Universal), Here Lies Love (Public), Sailor Man (also co-creator, New York International Fringe Festival, winner of Best Play) and The Buccaneer (also playwright, The Tank, Fight Fest), Dark Was the Night (Caliber/Image). When not making art out of violence, he can be found living in Brooklyn with his wife and sons.

JOSEPH PINDELSKI (Dramaturg) is a Chicago-based dramaturg and is very pleased to work with Sherri and everyone involved with Gordy Crashes. Chicago credits: Venus in Fur, Other Desert Cities (Goodman), The Sweeter Option, Neighborhood 3: Requisition of Doom (Strawdog), The Drowning Girls (Signal Ensemble), and The Glass Menagerie (Steppenwolf – Next Up 2012). He has worked with American Repertory Theater, NYU-Tisch School for the Arts, Inverse Theatre Company, and Harvard University. Joe earned his MFA in dramaturgy and theater studies from American Repertory Theater/Moscow Art Theatre School Institute for Advanced Theater Training at Harvard University and BA from Catholic University of America.

P. TYLER BRITT (Stage Manager) is a theater practitioner (director, actor, dancer/choreographer, singer, stage manager) and teaching artist. He is a graduate with a BA in Theater from Hunter College where he was the recipient of a Robert LoBianco Scholarship for Theater & Tyrone Guthrie Award for directing. Tyler is a member of Ricochet Collective.

GAGE STEENHAGEN (Technical Director, Assistant Director) grew up in Iowa and recently moved to New York City to become a starving artist. He has previously interned at Second Stage Theatre, worked on productions throughout New York, and assisted Sherri on two productions of Latrell Live Tonight! at Joe’s Pub. Gage is a member of Ricochet Collective.

CAROLINA ARBOLEDA (Assistant Stage Manager) received her BA in Arts and Sciences from Hunter College. She is the recipient of the Robert LoBianco Award for Stage Management and the Friars Foundation Scholarship. Most recently she worked as Production Stage Manager on Marla and her Prayers (New Perspective Theatre), The Pillowman (FITR Productions), City Non-Specific (La Micro Theater, FringeNYC), KEEPINGABREAST (Manhattan Theatre Mission, FringeNYC) and Bending All The Rules (Midtown International Theatre Festival.). She is delighted to be collaborating with Ricochet Collective’s production of Gordy Crashes.

CHRISTINE MCKENNA (Casting Director) is a freelance casting director based in New York City. Current projects: “Under Her Skin” (Nine Lives Productions/Triboro) and a number of independent theater, web-series and film projects. Christine established CMcKenna Casting in 2011 to be part of creating the type of intelligent, character driven, well acted, passionate independent projects that make films and television worth watching. Christine studied at the American Academy of Dramatic Arts.

IRT Theater is a grassroots laboratory for independent theater and performance in New York City, providing space and support to a new generation of artists. Tucked away in the old Archive Building in Greenwich Village, IRT’s mission is to build a community of emerging and established artists by creating a home for the development and presentation of new work. Some of the artists we have supported include Young Jean Lee, Reggie Watts, Mike Daisey, New York Live Arts, terraNOVA Collective, Immediate Medium, The Nonsense Company/Rick Burkhardt, CollaborationTown, Rady&Bloom,Thomas Bradshaw, Crystal Skillman,Tommy Smith, May Adrales, Katt Lissard, Erica Fay and many others. For info visit www.irttheater.org. This program is supported, in part, by public funds from the New York City Department of Cultural Affairs, Office of Councilmember Corey Johnson and The Nancy Quinn Fund, a project of the Alliance of Resident Theatres/New York(A.R.T./New York)