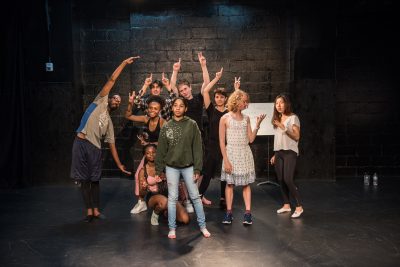 IN RESIDENCE: July 8- 20, 2019
I am … a review of sign/mime performance pieces ranging from published poetry to original pieces created by our students exploring identity and answering the question, Who am I?…..

Dangerous Signs is a performance group that represents global community building through the use of American Sign Language (ASL), spoken English, music and dance. We intend to present the beauty of Deaf, hearing and ethnic cultures when they all combine on stage.

IRT Theater is a grassroots laboratory for independent theater and performance in New York City, providing space and support to a new generation of artists. Tucked away in the old Archive Building in Greenwich Village,  IRT’s mission is to build a community of emerging and established artists by creating a home for the development and presentation of new work. Some of the founding artists we have supported include Young Jean Lee, Reggie Watts and Mike Daisey.