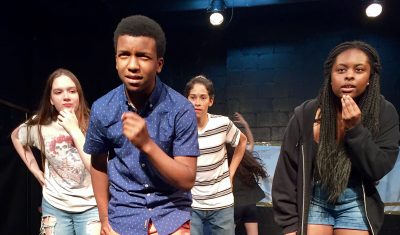 What happens when Deaf and hearing emerging artists come together to devise new work?

Luane Davis Haggerty, Ph.D. is a Senior Lecturer at RIT/NTID in Creative and Cultural Studies. She is a professional actress and has appeared on Broadway as a featured performer. Her Off-Broadway credits include thirteen Gilbert and Sullivan operettas and premieres of works by Robert Patrick and Joyce Carol Oates. Her regional and stock credits range from Shakespeare to Sondheim and she has been heard in a range of commercial voiceovers. Notable awards for her theater work include an Off-Off-Broadway Review award for Best Director in an NYC Showcase, and a Pulitzer nomination for her play “Windows of the Soul.”

Danica Zielinski is a graduate of the Masters of Secondary and Special Education with focus on English and Theatre from the National Technical Institute for the Deaf at the Rochester Institute of Technology.  She had been a performer and writer for Dangerous Signs, An American Sign Language performance group, for the last four years .Last year she had the opportunity to perform in “Tweltfh Night” a Public Theater production at the Delacorte Theatre in Central Park through the New York Deaf Theatre.  Favorite signing roles include Catherine in “Pippin” Peggy from “Godspell,” and Tracy Turnblad in “Hairspray.”  Danica is a freelance theatre designer and has designed over fifteen productions.  She is a merited designer through the Kennedy Center American College Theatre Festival.  She looks forward to new production of a remake of “Tell Tale Heart” that she co-created and working on becoming a Certified Deaf Interpreter.  Please visit and like Dangerous Signs on Facebook to follow to see future work.

Malik Paris is from Philadelphia, born and raised. He has been performed and co-founder member of Dangerous Signs since 2011. Godspell as Jesus and Pippin as Leading Player at GEVA in Rochester and tour in NYC last year. He has worked with New York Deaf Theatre (NYDT) in TITUS as Aaron the Moor and Rocky Horror Picture Show as Riff Raff. He was pleased to work with both instructors and kids past two weeks.

Lucia Constantino is a Long Island native who has been immersed in the Deaf community for most of her life. Learning from her immigrant parents and Deaf older sister, she has incorporated diversity and inclusion in her life with her peers as well as in her work. She has spent much of her high school career and summer vacations as a junior coordinator of youth ministry at Good Shepherd Church in Holbrook, NY as well as previous summers working as an assistant teaching at Developmental Disabilities Institute (DDI) of Long Island. She currently attends Rochester Institute of Technology where she is studying ASL English interpreting with an immersion in Deaf theatre to be able to provide access to and incision of the Deaf community in theater. She is a member of the ASL based performing arts group ‘Dangerous Sign’ performing in diverse plays and workshops in local theaters, elementary schools and universities for the past two years. She hopes to continue teaching acceptance and inclusion within theater and the Deaf community.