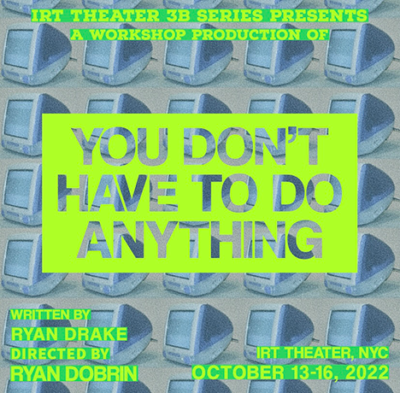 YOU DON’T HAVE TO DO ANYTHING

Teddy brings us into the past where it all began: 7th grade at a new school. After being shunned by the rest of their classmates, Teddy and Clark decide to have a sleepover that takes an unexpected and uncomfortable direction. They then fall out of touch until Teddy receives an AIM message from Clark after he’s been expelled for groping a student at school.

PLEASE NOTE:All sales final and there is no late seating at IRT Theater.
ACCESS:Please reach out to Kori Rushton krushton@irttheater.org with any accessible questions or accommodations you might have/need
COVID PROTOCOL:SEE BELOW

Ryan Dobrin (Director) is a queer, biracial New York-based director and producer interested in the exploration of emotional growth, spectacle, otherness, human connection, and morality. He is one of the Producing Artistic Leaders of The Movement Theatre Company, an Embodying Antiracism Initiative guest artist fellow at Wesleyan University, a member of the 2020-2022 Roundabout Directors Group, and the director of Those Guilty Creatures. Previous fellowships include The Drama League, Playwrights Horizons, Manhattan Theatre Club, Williamstown Theatre Festival, and Ars Nova. Ryan has been an associate/assistant on and off Broadway for directors including Tony-winners Sam Gold, Billy Porter, and Christopher Ashley as well as Trip Cullman, Tyne Rafaeli, and Margot Bordelon. Recent directing includes productions and development with Victory Gardens Theater, The Drama League, Fordham University, Atlantic Acting