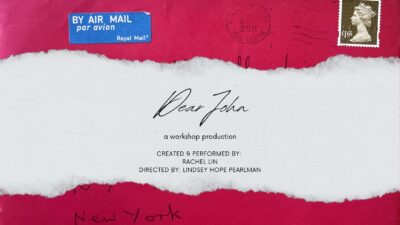 In 2011, an estranged father, “John,” reaches out to a long lost daughter for the first time… on Facebook. When he begins writing her letters, she begins a journey of reckoning with a previously unknown past.

DEAR JOHN is the story of what happens when a man shows up to parent a child who hadn’t been looking for a father. Spanning three continents and four decades, the piece weaves together excerpts from the letters, a recorded interview with my single mother who left a changing China in the 80s, and stories from growing up as an immigrant kid in New York City.

Rachel Lin (writer/performer) is an actor, writer, and producer based in Brooklyn who born in the UK, and raised in New York City’s Chinatown. Most recently, she played Detective Victoria Cho on NBC’s Law & Order: Organized Crime. World premieres include: Women by Chiara Atik, Fat Kids of Fire by Bekah Brunstetter, Ajax (NYT Critics’ Pick), and Mary-Kate Olsen is in Love by Mallery Avidon. She has devised work with: Aaron Landsman, Elastic City, P.S. 122, Target Margin, William Burke, Riot Group, Tiny Little Band, and more. She is a member of Ensemble Studio Theatre, and her podcast, Upstage Left, featuring intimate interviews with theater makers and friends, is available wherever podcasts are found. BFA, NYU Tisch. TheRachelLin.com.

Kelly letourneau (Producer) is a NYC-based actor, playwright, and producer. As an actor, Kelly has appeared off-Broadway, regionally and on tour. Acting credits include: THREE SISTERS (Two River Theater), A VALENTINE FOR SONDHEIM (Fiasco Theater), MIDSUMMER (Tiltyard), PRIDE AND PREJUDICE by Kate Hamill (Playhouse on Park), and THE APPLE BOYS (HERE Arts Center). Kelly has assisted new play development as an assistant for Kate Hamill’s DRACULA. Kelly is a proud tentacle of Octopus Theatricals, where she works as Producing Associate. Training: Fiasco Theater, RADA, NYU Tisch School of the Arts. www.kellyletourneau.com

Ingrid Larson (projection designer) is from Sioux City, Iowa and graduated from The Theatre School at DePaul University in Chicago where she earned her BFA in scenic design.

DEAR JOHN is made possible with the support of All For One Theater’s Solo Collective 2022. It has been developed as part of Town Stages Sokoloff Arts Residency, Asian American Arts Alliance’s 2021 Virtual Residency, and Poco A Poco.

PLEASE NOTE: All sales final and there is no late seating at IRT Theater.
ACCESS: ***IRT is a fully wheelchair-accessible facility. Please reach out to Kori Rushton if you have any accessibility questions or concerns, krushton@irttheater.org ***