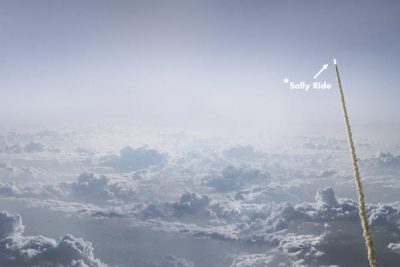 ARCHIVE/ICE FACTORY- A FOOTNOTE IN HISTORY*

“How does it feel to realize that…you are going to become a footnote in history
and a trivia question subject forever?”

It’s 1983 and America is sending its first female astronaut into space, breaking the highest glass ceiling. anecdota returns with a rollicking, genre-bending meditation on being an American first that looks back to ask how far have we traveled, how far have we come.

Leni Stern on guitar (recently named one of the “50 Most Sensational Female Guitarists of All Time” by Guitar Player Magazine), Felice Rosser on bass (who first picked up a bass borrowed from her friend Basquiat), Jessie Nelson on drums and Kirsten Nordine on keyboards.

anecdota creates original live performance works inspired by (too) little-known (true) stories of women who dared to shape history. Led by Erica Fae & Jill A. Samuels, their production Take What Is Yours was a Critics’ Pick in The NY Times, supported by Ms. Magazine, and nominated for a Henry Hewes Design Award. Fae’s feature film To Keep The Light won the Fipresci Int’l Critics’ prize, among other festival awards. Samuels’ interdisciplinary work has appeared at over sixty festivals, venues and sites.