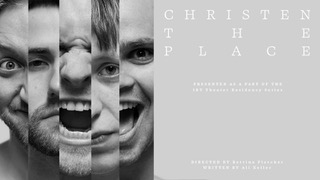 IN RESIDENCE: June 27 – July 10, 2022
A group of five friends come together to celebrate a housewarming. But as they attempt to help assemble to build a wardrobe, their happy facades crumble and one of the guys has a breakdown.

Christen the Place is a funny drama about young men facing their emotions and mental health as they try to save their friend while keeping themselves together.

ACCESS:Please reach out to Kori Rushton krushton@irttheater.org with any accessible questions or accommodations you might have/need

Martin Hammer (Daniel) – Educated in method acting alongside the rest of the company. Been working as a teacher for the last couple of years as well as some freelance projects on both stage and screen. Has a love for story telling and finds the complexities in stories to be the thing he gets drawn to.

Eivind Fosmark (Erik) – is an actor currently, both freelancing and working with the theater-companies; “all or nothing” and “apropos” within Oslo, Norway. He has played off Broadway before with the theatre-company “Cry Havoc” and is looking forward to his comeback to the New York stage.

Knut Mohrsen (Anders)- is an Actor and a Theatre teacher. He teaches at Råde Cultural School and at Vega Scene. He is part of two theatre companies and has directed the play «Alice Returns». Knut has starred in a couple tv series as well as short films and commercials.

Olav Kåre Dønheim (Per)- is an Actor, Theater Teacher and Improviser from Norway. He currently teaches at Oslo Cultural School and Oslo Theater center. He improvises with one up and coming musical group, Protones, and Trouple, which is an improvised love story. He is soon to be in the Cinema with the Norwegian blockbuster, Kampen om Narvik.

Mikkel Moripen Møystad (Thomas)-  is 25 year old actor and entertainer from Norway. He graduated from NSKI university with a bachelor in acting. Since then he has taken part in some short-films and a tv- show. Mikkel is also a comedic improviser and he is part of a group called XTZ Improv. With the group he travels around Norway performing comedy shows. Mikkel is set to debut as a director in November with the Sandvika theater.

Bettina Fleischer (Director)- trained as an actor at The London Academy of Music and Dramatic arts.  She has worked as an acting coach for several tv series including the award winning ‘22.July’. Bettina works as a scriptwriter, director and acting teacher for both the screen and stage.

This program is supported, in part, by public funds from the New York City Department of Cultural Affairs in Partnership with the City Council, New York State Council on the Arts, support for captioning and ASL interpretation provided in part through funding from Access A.R.T./New York, a program of the Alliance of Resident Theatres/New York (A.R.T./New York)