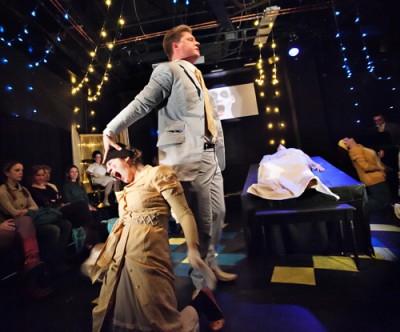 A wild ride into theatrical terrain that arouses the senses, in a space fantastically suited to its provocative energy, Carnival Round the Central Figure is the story of a young girl who takes five steps to the bedside of her dying friend, simply to acknowledge that he is dying and let him go. In a staging that is both wickedly funny and giddily horrifying, she is stopped by forces of religious fervor, denial, and insane positive thinking.

“Playwright Diana Amsterdam dares to take on this difficult subject matter in a macabre, surreal and sometimes hilarious look at the last days and hours of someone dying. A fascinating production, beautifully directed with wit and compassion by Karen Kohlhaas. Carnival Round the Central Figure is powerful and poignant in this stylistic and wildly theatrical presentation. All is right with The Carnival round the Central Figure. Please make an effort to see it.” — TalkEntertainment

“Comedies don’t come much darker than Diana Amsterdam’s Carnival Round the Central Figure, a hard-core but justified lampooning of the strange etiquette we adhere to when watching loved ones pass away. Amsterdam’s relentless script makes a glib burlesque out of the oblique religious platitudes, idle chitchat, and straight-up dishonesty we typically inflict upon the dying… it makes a touching case for, as Sigmund Freud said, making friends with the necessity of dying.” — Backstage (Critic’s Pick)

“Karen Kohlhaas’s direction is fluid and thoughtful, making good use of a large cast and small quarters. With little space to separate audience from action, this cozy theatre on Christopher Street swells with color and fervor…Amsterdam weaves together a strong argument for honest communication when dealing with death and terminal illness.” — nytheatre.com

“[Carnival Round the Central Figure] is a playground to explore the ways in which humanity deals with the ultimate truth through religion, silly chatter and platitudes. A production of the IRT Theatre, it is directed by Karen Kohlhaas with all the intensity it deserves.” — Times Square Chronicles

First presented as a co-production of the Atlantic Theater School and Tisch School of the Arts Theater Department in 1996, then fully produced at Washington D.C.’s Gunston Arts Center, Carnival Round the Central Figure returns to New York this winter with director Kohlhaas and five of the original cast members–Livia Scott , Kori Rushton, Shane LeCocq, Cynthia Silver and Christine Rowan–uniting from all over the country to reprise their roles. The rest of the large cast including a rousing chorus will be cast exclusively from Atlantic Acting School alumni.