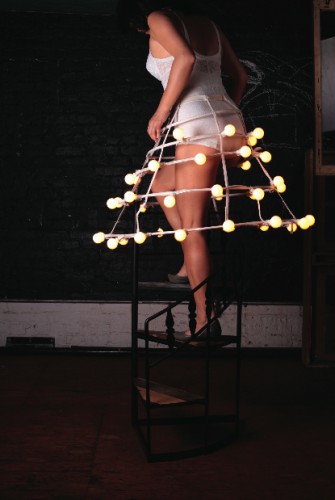 Doesn’t Everybody Do It In Paris?

DOESN’T EVERYBODY DO IT IN PARIS? is a dance theatre piece inspired by Flaubert’s Madame Bovary and choreographed by IM Managing Director Liz Vacco. An exploration of what happens when our ambitions are thwarted by reality, Paris reflects upon Emma’s fecklessly aspirational worldview and its relationship to the uniquely American culture of ambition, puritanical self-denial and conspicuous consumption. The piece further underscores these themes by introducing the story of the first English translator of Madame Bovary, Eleanor Marx Aveling, whose suicide by cyanide oddly mirrored Emma’s suicide at the end of the novel. Featuring a versatile, moveable set of live plants and choreographed specifically for untrained dancers, Paris investigates the novel and Marx’s life through movement, live and recorded music, video and spoken text.

DOESN’T EVERYBODY DO IT IN PARIS? was first presented as a work-in-progress in August 2004 at Green Street Studios in Cambridge, Massachusetts and was workshopped in IRT’s 3B Development Series in New York in June 2009.

This program is supported, in part, by our donors and by public funds from the New York State Council on the Arts, the New York City Department of Cultural Affairs and the Nancy Quinn Fund, a project of A.R.T./New York. Production design support provided by the Edith Lutyens and Norman Bel Geddes Foundation.