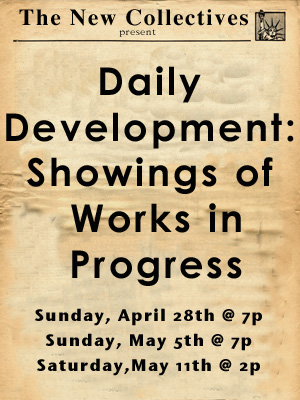 Public showings of three works in progress by Ben Lewis, The Coldharts, and Rachel Dart.

Monica Axlrod, a disgruntled NYC stormbird of the working class, returns to her midwestern roots under the guise of a supermarket worker, hoping to unionize the local chain on the eve of its takeover by a vast global empire.

Ben Lewis is a writer, director, actor and teaching artist. He is a founding member of BREAD Arts Collective. With BREAD Arts, Ben has directed and acted in Waiting for Lefty, co-wrote and acted in The Great American Casket Company at Greenwood Cemetery, and adapted and acted in Rise and Fall. His play Lonesome Devil was produced at Could City in Brooklyn with many BREAD members. His plays have also been produced at The Players Theater, Access Theater, The Red Room, Triskellion Arts, and The Time Square Arts Center, as well as fringe festivals in New York, Los Angeles and Minneapolis. Ben’s play Wolfgirls won The Bitter Lemons Innovative Theater Award and received and extended run at The hollywood Fringe Festival. His play Happy Sauce is published in several one-act anthologies. His one-act Hooker Raft has been produced five times in NYC in the last three years. Ben is one half of the writing/performing duo LEWIS AND ANDERSON (with fellow BREAD member Lyndsey Anderson) whose work includes Speeches and Toasts and Veruca and Dex Take It Back! As a teaching artist, Ben has devised original work with young people from inner city housing projects to rural mid-western communities. He earned his BFA from Boston University.

Sunday, May 5th @ 7p
The Unrepentant Necrophile
Presented by The Coldharts
Created and performed by Katie Hartman, Nick Ryan and Nathan Gebhard
In collaboration with Mark Benzel and Lindsey Hope Pearlman
A punk musical about a mortician and her body.

The Coldharts is a touring theater company founded by Katie Hartman and Nick Ryan in Brooklyn, New York in 2012. We are founding members of the Twin Cities Horror Festival in Minneapolis, Minnesota. We create devised, music-theatre inspired by the American Gothic. Our shows include The Legend of White Woman Creek, Edgar Allen, and Eddie Poe. For more information visit www.thecoldharts.com

ALPHA is a modern day adaption of Shakespeare’s TAMING OF THE SHREW. Set in the college greek system, and utilizing an all woman-identified cast, ALPHA is a dark comedy about how internalized misogyny leads us to participate in, and enable, the systems that oppress us.

Stephanie Swirsky writes about illness, death, grieving, and cultural identity with humor, levity, and a sense of romantic adventure. Her plays have been developed at The Brick, The Flea, Pasadena Playhouse, Theatricum Botanicum, and WordBRIDGE, among others. She is a CubaOne Literary Fellow, recipient of the Israel Baran Award, and under commission with the Iron Tongues Project between the University of Southern California and the Adam Mickiewicz Institute in Poland. Stephanie is active with Let Us Work, an advocacy group that aims to combat and end sexual harassment in theater. Originally from the suburbs of New Jersey, Stephanie currently lives in NYC, and received her BA from NYU and MFA in Dramatic Writing from USC.