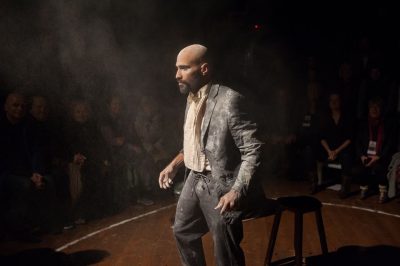 Watch our live recorded show from January 2020 on your own and then join our artists for a Q&A on October 27, 2020 at 8pm EST to discuss the work and its developments.

Make sure to watch the show on your own before coming to the live Q&A. https://vimeo.com/ondemand/yovo

Register in advance for this webinar:
https://zoom.us/webinar/register/WN_8g7m_NboQtS7UGfkAAtpsg

After registering, you will receive a confirmation email containing information about joining the meeting.

Carmen King is an actress, director of artist sign language (DASL), and ProTacticle Interpreter. She has performed for New York Deaf Theatre in the past such as “The 39 Steps” and “Dr. Jekyll and Hyde.” As for IRT, she has choreographed, directed, and produced “Movement Festival” a dance performance. Plus, she had done a few small appearances in television and commercial. While not acting, she is usually teaching American Sign Language or interpreting for the DeafBlind community at theatre, events, and conferences. Carmen wants to thank her ASL community for supporting her.