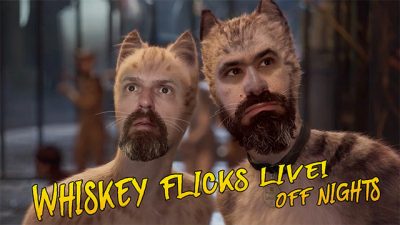 Whiskey Flicks Live! is an unscripted, booze-infused, deep dive into film. At each performance, Daniel McCoy projects a series of surprise movie clips based on a predetermined theme and Michael Niederman provides an impromptu mix of film criticism, social commentary and personal narrative…with whiskey. For this special Off Nights edition, the theme is “underappreciated, underseen, and under-awarded flicks from our most esteemed filmmakers.” As always, Mike doesn’t know what Dan’s going to show him, Dan doesn’t know what Mike’s going to say, and the audience is along for the ride. There may be dancing. There will definitely be drinking. Hopefully you walk away remembering why you love the movies.

We’ve all had our off nights, right? In art, in love, and in life… We aim for greatness and sometimes we achieve…something else. Our favorite directors, actors and screenwriters are no different, and in the first indoor performances of Whiskey Flicks Live! since 2019, Michael Niederman and Daniel McCoy will use their unscripted, booze-infused, deep dive into film to celebrate the swings and misses of their cinematic heroes.

In these two Monday night performances – the very definition of “off nights” – a limited capacity audience will join Mike and Dan in the exploration of underappreciated, underseen, and under-awarded flicks from our most esteemed filmmakers. You know, the kind of films the art houses tag as “due for reappraisal.” Together we’ll shine a spotlight on some deep cuts that maybe are deep for a reason.

What is there to learn from the lesser works of great artists? How do we measure success in art? And what have we been missing by avoiding these movies in the first place? Whiskey Flicks Live! Off Nights will seek to answer these questions in the only way Mike and Dan know how: through rapid fire, off-the-cuff, whiskey-fueled mayhem.

As always, Mike is in the dark about what clips will be shown until the moment the show begins. Dan is clueless about what Mike’s going to say. And the audience is there for it all. There may be dancing. There will definitely be drinking. Hopefully you walk away remembering why you love the movies.

MICHAEL NIEDERMAN is a theater maker, filmmaker and educator, proudly born and raised in New York City. His work has been performed at Theater Row, The Eugene O’Neill Theater Center, The Workshop Theater, The Bowery Poetry Club, The Actors Studio Theater in New York, and New York Stage and Film. In recent years his work has won the Samuel French Short Play Series, and has been presented by Blue Box Productions, Brain Melt Consortium, Mason Holdings, Ignited States, and New York Madness. He regularly participates in the Primary Stages Writers Lab, The Flea’s Pataphysics, and The Actors Studio Directors Lab. His screenwriting and directing work has won awards from Columbia University’s Faculty Selects, The Braodcast Education Association, and the National Association of Latino Independent Producers. When not creating theater or film, he spends most of his time as a private writing tutor, working with children and adults of all ages, from all parts of the globe.

DANIEL MCCOY is a playwright and performer based in New York City whose plays include Dick Pix, Perfect Teeth, Nothing Beyond the Light Matters, Four and Twenty Draculas, Cleave, and Epimythium. His work has been produced and developed recently with Theaterlab, Primary Stages, Project Y Theatre, IATI Theatre, Dutch Kills Theatre, and Simple Machine Theatre. He is an alumni member of the Project Y Playwrights Group and the Cimentos Play Development Program at IATI Theatre. As an ensemble member of the New York Neo-Futurists, Daniel has written and performed in The Great American Drama, Mute, (un)afraid, and the long-running late night shows The Infinite Wrench and Too Much Light Makes the Baby Go Blind. Daniel is a graduate of the MFA Playwriting Program at Hunter College, where he studied with playwrights Tina Howe and Arthur Kopit and dramaturg Mark Bly. He directs every spring for the Writopia Lab Worldwide Plays Festival, showcasing the work of young playwrights.

This program is supported, in part, by public funds from the New York City Department of Cultural Affairs in Partnership with the City Council.