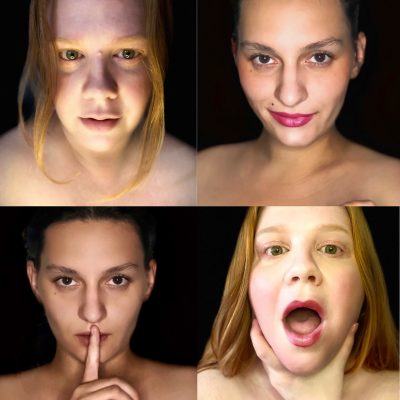 A story of two Maries.
One ruled wax, one ruled France.
One survived, the other did not.
So one made a sculpture of the other’s guillotined head… and launched an empire.

Before Madame Marie Tussaud achieved wax museum fame, she was a sculptor, nearly guillotined during the French Revolution. She escaped the Reign of Terror by using her talents, and went on to not only document history but to become it.

Inspired  by outrageously unreliable legends and claims, this story reimagines the historical fantasy of Marie’s Marie.

BIOS
K8 AUGUST (they/them) (Lighting Design) has hidden out in downtown theater spaces, turning things on and off for the past decade. When not turning lights on and off, they’re often found in tech closets muttering. Past Lighting projects include but are not limited to Devil in a Box, a sex thing (or, a bunch of liberals getting uptight about the sociopolitical implications of their desires), Basil Twist’s Puppet Parlor.  They have a profound enjoyment of french toast.

JODY CHRISTOPHERSON (she/her) (Performer, Writer/ Director) is a New York based, Nebraska-born, generative artist. Her mediums include; performance, writing, conceptual design, direction, music/foley, photography, film, and curation. Reviewers have called her a “visionary in the theater world and legendary storyteller”, who is “a talent to watch, not to mention a pleasure to hear”. Her works have been performed in 28 cities in 6 countries, including Canada, Detroit MI, New Orleans, Key West FL, Miami, Amsterdam, Germany, Lithuania, Australia, New York. She has been producing and co-producing her work since 2004 in America and abroad. Her productions have been nominated for a Drama League Award and 6 Innovative Theater Awards. Ms. Christopherson is the recipient of an Indie Theater Fund Emergency Grant, a New York Society Library Grant for emerging female writers underwritten by Alexander Sanger, the All for One So-Co Residency, and The LIT Fund Grant. Generative works include; Greencard Wedding, AMP: The Electrifying Story of Mary Shelley, St Kilda, Necessary Exposure, and Excavation. https://linktr.ee/JodyChristopherson

AMELIA PARENTEAU (she/her) (Dramaturgy) is a writer, French-English translator, and theater maker with a passion for social justice, based in New Orleans. An alumna of Sarah Lawrence College, she has worked with 600 HIGHWAYMEN, Ping Chong + Company, The Civilians, the French Institute Alliance Française (FIAF), The Lark, the New York International Fringe Festival, the Park Avenue Armory, and Theatre Communications Group in New York City, as well as Trinity Repertory Company in Providence, RI, People’s Light in Malvern, PA, the Eugene O’Neill Theater Center in Waterford, CT, the Théâtre du Soleil in Paris, France, and Intramural Theater and No Dream Deferred in New Orleans, LA. Her writing and translations have been published in numerous outlets including American Theatre Magazine, Asymptote, Contemporary Theatre Review, and HowlRound. www.amelia-parenteau.com

COVID PROTOCOL:
This performance will be seated at full capacity without social-distancing. All guests (ages 2+) are required to wear a face-covering, regardless of vaccination status and must show proof of vaccination. However, performers will not be masked.

There are multiple ways to show proof of vaccination. Which way would you like and I will put that on the website-

1. A photo or hard copy of their CDC vaccination card
2. NYC COVID Safe App
3. New York State Excelsior App
4.Official vaccine record
5. A photo or hard copy of an official vaccination record of a vaccine administered outside the United States for one of the following vaccines: AstraZeneca/SK Bioscience, Serum Institute of India/COVISHIELD and Vaxzevria, Sinopharm, or Sinovac.

This program is supported, in part, by public funds from the New York City Department of Cultural Affairs in Partnership with the City Council.