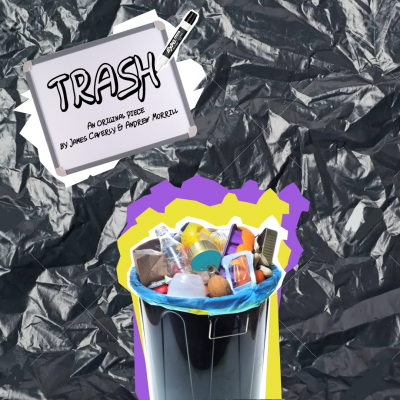 Jake and Tim are Deaf roommates in the city. Jake is a pessimistic account manager for a video-relay service company. Tim survives on a part-time gig as an ASL teacher, constantly hustling for free stuff. One morning, a heated argument unfolds in the kitchen– who’s turn is it to throw out the trash? As their argument escalates, they get a glimpse into their lives as two Deaf individuals navigating a world that’s not made for them. Throughout the course of the play, the audience weighs their opinions and ultimately decides which roommate deserves to throw out the trash.

Michelle A. Banks is an award-winning actress, writer, director, producer, motivational speaker, and teacher.  She has taught deaf, hard of hearing, and hearing children K-12 for over 30 years in performing arts and American Sign Language (ASL). Former Artistic Director of Onyx Theatre Company for over 11 years in NYC. Her other achievements include the 2017 recipient of Gallaudet University’s Laurent Clerc Award; the 2002 recipient of the Christopher Reeve Acting Scholarship; an Individual Achievement Award from the National Council on Communicative Disorders; a featured article in the February 1998 issue of ESSENCE magazine. Her acting appearances include SOLE (T.V. Pilot), THE C.A. LYONS PROJECT (Alliance Theatre), SOUL FOOD (Showtime Series), STRONG MEDICINE (Lifetime), GIRLFRIENDS (UPN), COMPENSATION (Independent Film), FOR GIRLS WHO CONSIDERED SUICIDE WHEN RAINBOW IS ENUF) (NY & LA) and BIG RIVER (Mark Taper Forum & Ford Theater).  Michelle’s most recent directing credits: ISM, WHACKED!, A Sneak Peek of A RAISIN IN THE SUN (short film), Gallaudet University’s A RAISIN IN THE SUN, LOOK THROUGH MY EYES, SILENT SCREAM, Z: A CHRISTMAS STORY, WHAT IT’S LIKE? (One Man Show) and IN SIGHT AND SOUND: DE(A)F POETRY I, II, & III.  Currently, Michelle Banks is the Artistic Director of Visionaries of the Creative Arts (VOCA) – www.visionariesofthecreativearts.org.

TRASH was originally developed through IRT’s Residency Program & JACK Labs. This program is supported, in part, by public funds from the New York City Department of Cultural Affairs in Partnership with the City Council, New York State Council on the Arts, support for captioning and ASL interpretation provided in part through funding from Access A.R.T./New York, a program of the Alliance of Resident Theatres/New York (A.R.T./New York)