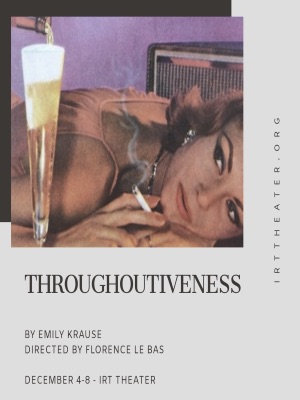 Elise’s old man is dead, the son-of-a-bitch. Nate and Hazel have joined her in the middle of nowhere to dance, drink, and self-destruct, as together they navigate love and mourning. Come out, crack open a Budweiser and knock one back, or two, or ten, for the people who have stepped on you. Because a good wake is basically a party…right?

Spearheaded by an all-female production team, Throughoutiveness is a play about grief and moving on, with script and music by Emily Krause. Throughoutiveness aims to show an honest and unfiltered portrayal of a young woman’s journey through grief –one in which her anger is not policed, and her age is not grounds for dismissal. This will be the first New York production of Throughoutiveness, following a workshop reading with the Playwriting Collective in 2016.

Florence Le Bas is a New Zealand born New York-based Theatre Director, Costume Designer, and Arts Administrator. She has a passion for new plays and is interested in telling character driven stories that are courageous, intimate, and joyful, with a touch of magic. Florence has developed new work with The Flea, The Tank, The Wild Project, Exquisite Corpse Company, Dixon Place, The Arctic Group, and IRT Theatre. ​​She is a founding member of The Arctic Group- an interdisciplinary performing arts collective. She has also worked with The Bushwick Starr, En Garde Arts, The Public Theater, Irondale Ensemble Project, and Northwest Children’s Theater and School. Florence has a degree in Theatre from Whitman College. She currently works as the Associate Program Manager for the SAG-AFTRA Foundation.

Emily Krause is a Brooklyn-based playwright, actor, and songwriter originally from Portland, Oregon. She is currently a playwright-in-residence with Exquisite Corpse Company, where she is collaboratively developing Water, Water, Everywhere, an immersive play about home, memory, and the ways that water connects us all. Her work has been read or developed with The Tank, the Great Plains Theatre Conference, Exquisite Corpse Company, the Playwriting Collective, the Bechdel Group, The Hearth, and TinyRhino. Her play SOMETHING FOR THE FISH had its premiere production at the Center for Performance Research in Brooklyn in 2018. She was last seen onstage at the Bushwick Starr as a choir member in Heather Christian’s Animal Wisdom. BA: Whitman College.