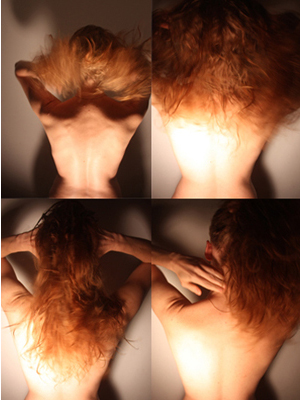 No longer able to self-medicate with alcohol and in a desperate search for escape, a young woman finds herself standing on the edge of the 1 subway platform. She faces the train as it roars into the station, and then faces the consequences as she commits herself to a psych ward in one last attempt to commit to herself.

Daniel Talbott (director) is an actor, director, playwright, producer, literary manager of Rattlestick Playwrights Theater, and is the artistic director of the Lucille Lortel and NYIT Award-winning Rising Phoenix Rep. Recent directing work includes Scarcity (Rattlestick), Mike and Seth (Encore), Slipping (Rattlestick), AZAK (Rattlestick/Encore), Lake Water (Neighborhood Productions), Eightythree Down (Hard Sparks), Much Ado About Nothing (Boomerang), Squealer (Lesser America), and The Umbrella Plays (the teacup company/FringeNYC – Overall Excellence Award: Outstanding Play). His plays include Slipping (The Side Project, Rattlestick), Yosemite (Rattlestick), AZAK (Encore/Rattlestick), What Happened When (RPR/HERE), Someone Brought Me (Quince Productions), and Mike and Seth (Quince, Encore, upcoming at The Side Project). He is a graduate of Juilliard and of Solano College Theatre’s ATP, and teaches at Primary Stages/ESPA.

Kid Brooklyn Productions (Producer) Kid Brooklyn Productions’ mission is to create theatrical work that is unique, thought provoking, fearless, relevant, provocative, entertaining, raw, humorous, and honest. We want to create theatre that explores every aspect of the human experience light and dark, heartbreaking and joyful, beautiful and broken. We want to challenge ourselves as artists and break our boundaries in the stories we tell on stage. Past productions include the American Premiere of Unbroken by Alexandra Wood, the World Premiere of WILD by Crystal Skillman, The Little Dog Laughed by Douglas Carter Beane, and The Beach Plays: San Francisco (co-production with Rising Phoenix Rep). Upcoming projects included the World Premiere of All’s Well That Ends Happy by Sarah Shaefer.www.kidbrooklynproductions.org

Artistic Director Evan F. Caccioppoli created Kid Brooklyn Productions with the hope of creating fearless and honest theatre that explores every aspect of the human experience. Born and raised in Brooklyn, New York the name Kid Brooklyn comes from a love for where it all began and the joy of looking at things with a kid’s eyes, always fresh and new. He is a director, producer, deviser, developer of new work, teacher, and sometimes actor. Evan is a very proud company member of Rising Phoenix Rep, where he luckily gets to work with his mentors Daniel and Addie Talbott. He is very excited to share Sarah’s beautiful play with New York audiences!

Addie Johnson Talbott (Producer) most recently appeared in The Beach Plays (Rising Phoenix Rep/Kid Brooklyn), Follow by Crystal Skillman (Balancin’ Productions), Three Sisters by Daniel Reitz and The Telling by Crystal Skillman (Rising Phoenix Rep), Slay the Dragon by Victor Lodato (O’Neill), and Late: A Cowboy Song by Sarah Ruhl (Clubbed Thumb). She is an artistic associate of Rising Phoenix Rep, with whom she has produced numerous plays Off-Broadway and in the Indie Theatre, most recently the Lucille Lortel Award-winning All the Rage by Martin Moran, as well as the ongoing Cino Nights series. Addie is an associate theater editor of The Brooklyn Rail, a member of the acting company for the MCC Theater Playwrights’ Coalition, and has worked as a literary assistant at NYTW and a writing/research assistant to John Guare.

For sold out performances of The Gin Baby, there will be a wait list started at the box office 30 minutes before curtain for that night’s performance. Please come down and we’ll absolutely do our best to get everyone in. Please be advised the theatre is small and seating is limited.