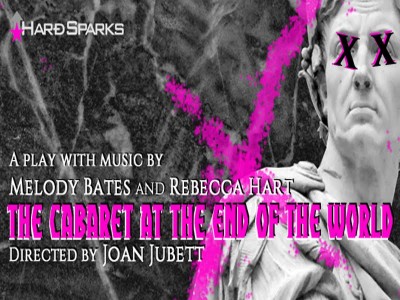 The Cabaret At The End Of The World

THE MARCH 14TH SHOW HAS BEEN CANCELLED

It’s the Ides of March—What could go wrong? Irreverent and vivacious hosts Flora and Fawna invite you to the hottest club in Ancient Rome for a sly, sexy, hilarious romp through Julius Caesar, affectionately burlesquing Shakespeare and Rome while casting a sharply satirical light on the play’s themes and how they reflect our own times.

The Cabaret At The End Of The World is a play with songs created by Melody Bates (book) and Rebecca Hart (music and lyrics), and directed by Joan Jubett. It was originally commissioned by Maine’s Opera House Arts at The Stonington Opera House.

Melody Bates’ sly, sexy, hilarious romp through Julius Caesar, affectionately burlesques Shakespeare and Ancient Rome while casting a sharply satirical light on the play’s themes and how they reflect our own times. Irreverent and vivacious twins Flora and Fawna run the hottest underground club in Ancient Rome, regaling nightly audiences with song, dance, and just the right amount of scandal. It’s the Ides of March and Caesar’s back in town: the club is abuzz with soothsayers, saboteurs, Senators, and other degenerates. Flora and Fawna launch into their show, but with Rome on edge, satire can be a dangerous game. The feisty hostesses strive to keep their audience entertained–and safe–while the events of Shakespeare’s play threaten to overwhelm the evening. Will Caesar become Emperor? Will anyone become Emperor? Will Rome survive the mob? Will democracy survive a Roman meltdown?—and just what does democracy mean if not everyone gets to participate? Showbiz, glamour, original music, comets, philosophy, assassinations, war, ghost stories, knock knock jokes, and one particularly surly lion…It’s the Ides of March at Club Caesar—what could go wrong?