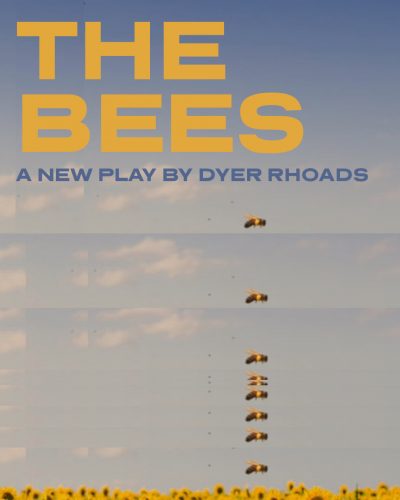 CORONAVIRUS UPDATE:
In the interest of protecting the health and well-being of our artists and our patrons The Bees is closed.

Ratstar Industries is proud to present, in partnership with IRT, the Ratstar Residency. Featuring a new play, The Bees by Dyer Rhoads; a late night cabaret of oddities and aberrations, Bouffon! Bouffon! Bouffon!; and a play reading series.

Some place that’s green. Some time when things are different.

Niamey brings her son, The Boy, to her family’s now abandoned summer home in Maine. The Boy starts stealing from the dusty liquor cabinet. The Neighbor has a gun. She shoots foxes when they eat her chickens. A beekeeper named Tim is raising bees, helping them hold on. When The Boy drunkenly destroys a precious bee hive, he incurs a debt to the beekeeper.

The Bees is an unconventional summer romance about facing fear, the forest, and the road that is a snake devouring itself.

The Bees
Written and Directed by Dyer Rhoads

Dyer Rhoads is the artistic director of RatStar Industries. Dyer is a writer, director, teacher, and performer of theatre from Portland, Maine. He has worked with Lincoln Center Education, the Children’s Theatre of Maine, The Celebration Barn Theatre, Figures of Speech Theatre Company, Shakespeare & Co, and the North Carolina Symphony.

Dyer seeks to create one-of-a-kind ensembles that perform with spontaneity and pleasure. His work embraces humor, idiosyncrasy, and surprise. He challenges traditional notions of the audience and often includes or implicates them in the work.

In 2016, he co-founded a summer retreat in Walpole, Maine for college aged artists to create new theatre. Over three summers, he grew the residency as its Artistic Director. The program, which came to be known as the Aris Project, hosted over 20 artists, oversaw the development of a range of material, from full length plays to ensemble devising to short films, and presented work at Playwrights Horizons in 2018.

Most recently his new play, Lesson For The Future, premiered at Lincoln Center. Other directing includes Super Trooper, also at Lincoln Center, and We Are Proud To Present a Presentation… by Jackie Sibblies Drury at UNCSA. His play, Humans Ar Peple To, was featured at the Barter Theatre College Playwrights Festival in 2019. His other plays include Space/Toes/Bed, The Bees, and Untitled Foley Studio Play. Dyer graduated from the University of North Carolina School of the Arts School of Drama in 2019. Dyer was also a 2019 William R Kenan Jr Fellow at Lincoln Center Education.www.dyerrhoads.com

Chris Holtkamp (co-producer, performer) Chris is a NYC based actor and recent graduate of the drama program at UNCSA. Recent credits include Lesson for the Future (Slug) at Lincoln Center, Romeo & Juliet (Friar Laurence) at NC Symphony, Balm in Gilead (Fick), We Are Proud to Present… (Actor 3), and Middletown (Various) at UNCSA. He is founding member of The Aris Project, a theatrical summer residency in Maine.

Maddie Milligan (co-producer, dramaturg) Maddie is a New York based producer and arts administrator.  Currently, she is working as a Development Assistant at Playwrights Horizons. Previous experience includes Administrative and Development Fellow at SPACE on Ryder Farm; GM/Finance Intern at the Atlantic Theater Company; Co-Founder and General Manager at a theatrical summer residency, The Aris Project; and Administrative Assistant at UNCSA School of Drama.  Maddie most recently worked as a PR/Marketing Liaison for the US Premiere of Decky Does a Bronco Off-Broadway and is a Producer Alum of The 24 Hour Plays: Nationals.  She also holds a BFA in Acting from UNCSA.