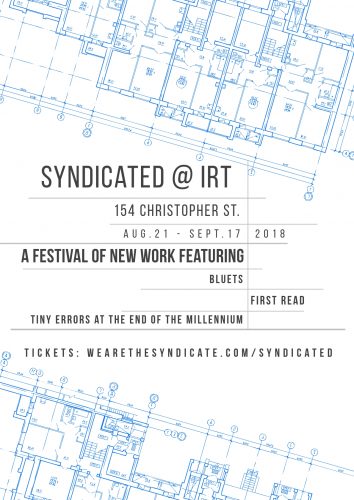 Syndicated is a festival of new work by ensemble theater company The Syndicate and their collaborators. It features two new plays and a week-long readings series.

“Suppose I were to begin by saying that I had fallen in love with a color…” A new solo performance adapted from the critically acclaimed book by Maggie Nelson.

The Beasts of Warren by Azure D. Osborne-Lee
the desert play (or Nothing Feels Like) by Hal C.
Hunting by Nelle Tankus

It’s 1999. Boy bands. Y2K bunkers. Dance competitions. Monica Lewinsky—we laid the groundwork for a new millennium. So how did we get here?

PLEASE NOTE: All sales final and there is no late seating at IRT Theater.

***IRT is a fully wheelchair-accessible facility.***