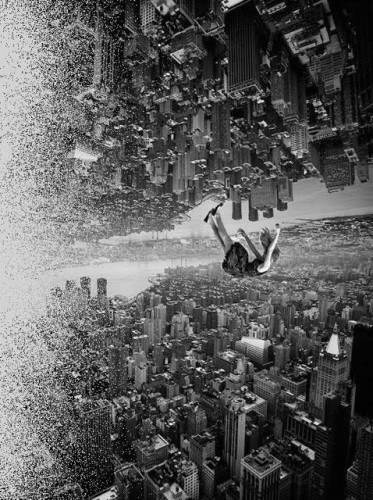 What is the place of art and imagination in our increasingly Orwellian society? Sub-Basement follows Adrienne, a former poet now Royal Canadian Mounted Police trainee, on an absurdist odyssey to find her true purpose amidst the dark corners of New York City, the depths of the Drama Book Shop, and her muddled past. Her voyage is guided by Gustav (a one-time climatologist) and Arnaud (an erstwhile poet), all while being pursued by Simon, who (unbeknownst to her) is set on becoming her fiancé. Are we ever free of the disappointments of the past, and can we escape the expectation of our parents? Join on a voyage deep into Adrienne’s psyche — and try to discover what life’s really about.

Cast & Creative Team
Tom Block (Playwright) is an artist, writer and activist best known for the development and implementation an activist art theory, “Prophetic Activist Art,” which was published as an art/activist manifesto this year (Centre for Human Ecology, Scotland). Mr. Block has more than two decades of painting/activist work. Recently, Mr. Block has begun writing plays – and utilizing his artwork as part of the set. He has had his multi-media plays produced in Washington D.C. and New York. He received a LABA creative development fellowship for 2013-2014 at the 14th Street Y in New York’s East Village to produce a painting/theater collaboration, and is currently playwright-in-residence at Athena Theatre Company (NY), working toward the production of Sub-Basement.

Patrick K. Dooley (Simon) is an actor, director, and improvisor.  His work as a performer has been seen onstage at 59E59, SubCulture, The Annoyance Theatre, and in multiple productions with Less Than Rent Theatre with whom he works as Associate Artistic Director. He also performed Philadelphia, Here I Come! with New York/New Belfast for distinguished guest Liam Neeson.  As a director he has developed several new works including for The 24 Hour Plays: Nationals. He has assisted at Lincoln Center, Carnegie Hall, and for New York City Center: Encores. Patrick has a BA in Theatre Performance from Fordham University.

Jonathan Cottle (Set Designer and Properties) – Jonathan is a theatre artist working in multiple capacities. His lighting and scenic design, and original creative work has been seen at: Theatre Row, the Incubator Arts Project, Abrons Arts Center, The Flea Theater, The Irondale, The Cherry Lane, Dixon Place, New York University, Fordham University, Dean College, HERE, and the Bushwick Starr, as well as many many site specific locations around New York City. He has worked with the companies: Foundry Theatre, Object Collection, Live Source, MaYi and Theatre Reconstruction Ensemble. He enjoys building, creating and rehearsing in backyards in the summer, unheated church lofts in the winter and dusty basements and empty warehouses all year round. He is currently developing a number of cool projects.

Patrick Lachance (Sound Designer) – Patrick is a New York City based sound designer. Past work includes Lonely, I’m Not (West of 10th), The Winter’s Tale (Amerinda), Macbeth and [gay] Cymbeline (Theatre Prometheus), The Plantation (Brave New World Rep), The Model American, Okay, and The Coming World (Williamstown Theatre Festival), and The Fantasticks, You Can’t Take It With You, and The 39 Steps (Cider Mill Playhouse). Patrick has also assistant designed a wide range of productions in NYC, most recently The Profane (Playwright’s Horizons) and Present Laughter.

Athena Theatre Company (ATC) was founded in 2002 with the intention of presenting contemporary, off-beat and irreverent psychological dramas and dark comedies. Of the seventeen shows since its inception, ATC has consistently garnered both audience and critical acclaim. Since gaining non-profit status, ATC has produced up to three shows per year. ATC is dedicated to producing first-rate theatre and also spearheaded a regular ongoing play reading series, Athena Reads. Dedicated to exploring original works, the ATC Play Reading Series has presented over 80 new plays in a lab format for the benefit of emerging writers on a monthly basis. In 2005 ATC produced a critically acclaimed production of PROOF by David Auburn; ReviewPlays.com said, “Athena Theatre is more than fulfilling its mission of bringing quality theatre to a desert of mediocrity.” In 2006, ATC brought great storytelling to audiences with SLOW DANCE ON THE KILLING GROUND; “Athena Theatre Company decided to cinch its thespian belt another notch and go for it again.” Since 2004, ATC has received 16 Critics Pick from Los Angeles papers. Nine Actors/Actresses have made the “Top Ten Best Actor/Actress of the year list” from Metro LA and ReviewPlays.com over seven productions. The 2007 production of PTERODACTYLS by Nicky Silver received four Critic’s Choice selections and was extended by popular demand. In 2009, ATC moved to NYC while continuing to produce productions in Los Angeles. The most recent full production was in NYC, a World Premiere Off-Broadway at 59E59 Theaters called THE MAN UNDER by Paul Bomba, February 2013; this marked ATC’s true transition to producing new works and supporting emerging playwrights. In 2014, Athena Writes, 8-10 playwrights assembled for a one-year exploration of the year’s theme, was created. Each playwright writes a ten-minute play as well as a full-length play while in residence. ATC’s upcoming world premiere production of SUB-BASEMENT by Tom Block was written inspired by ATC’s mission statement, developed through Athena Reads with two exciting productions scheduled for 2017! After opening in New York City at IRT, SUB-BASEMENT will move the same production to Silver Spring, MD. This production is supported by a grant from the Arts and Humanities Council of Montgomery County, MD.

“Athena Theatre Company’s production has brought together a strong creative team to put up a challenging but worthwhile script. Given the nature of the play and its movement in fits and starts, the level of professional production is a boon.”
–Will Jacobs, Theatre is Easy