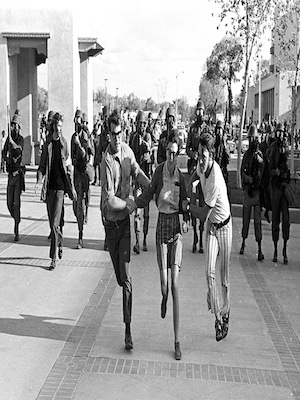 SIXTY NINE SEVENTY was developed, in part, through Kori Rushton and the IRT 3B Development Series. And is brought to you by Playwright Michael Eichler and Director/Producer Paul Dederick.

Amidst growing civil unrest and distrust of the Nixon Administration, we follow four students at Buffalo State College, from different socio-economic backgrounds, as they try to find the right side of history. Throughout the 1969 -70 Academic year, we see Barry, Naomi, Sharon and Andy dealing, in their daily lives, with issues like misinformation and public manipulation, women’s rights, racial equality and inherent racism, abortion access, political corruption and federal agencies monitoring activist groups, all amidst a publicly unsupported war and draft to supply it. As these students are confronted with a barrage of oppression and manipulation to further a corrupt administration, they are forced to examine their perspectives and look past what they’re told, to define themselves and what they are willing to do for what they believe in.

Michael Eichler spent most of his career as a community organizer, working in low income neighborhoods across the U.S. He stumbled into playwriting late in life.  His plays center on working class characters and the challenges they face. He has had productions in San Diego, LA, Portland and NYC. Two plays are planned for production in London this year. (eichlerplays.com) He is a Buffalo NY native and a Buffalo State graduate, class of 1972.

Paul Dederick is a Graduate of the London Academy of Music and Dramatic Arts(LAMDA) with his Masters in Classical Acting. This will be his Directorial Debut. Cast is as follows: Scott Gordon as Andy, Aïssa Guindo as Naomi, Katherine Olson as Sharon. All cast and Artist information can be found at sixty-nine-seventy-producion.my.canva.site.

PLEASE NOTE: All sales final and there is no late seating at IRT Theater.
ACCESS: ***IRT is a fully wheelchair-accessible facility. Please reach out to Kori Rushton if you have any accessibility questions or concerns, krushton@irttheater.org ***