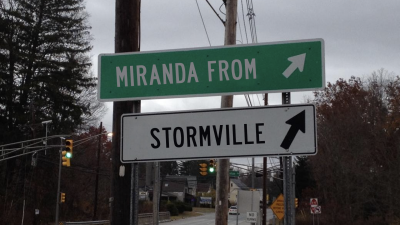 “I have to believe we can be our best people in the wake of a storm.”

Adam Bertocci (Playwright): Adam Bertocci is an award-winning writer and filmmaker. His work has been praised by Entertainment Weekly, USA Today, The New Republic, GQ, The Wall Street Journal, The Guardian, Back Stage, Broadway World, E!, Maxim, IGN, Wired, Film Threat and more. His first play was the worldwide viral sensation “Two Gentlemen of Lebowski”, now published by Simon & Schuster, which received acclaim from the Royal Shakespeare Company and the Folger Shakespeare Library; AOL Pop Eater hailed Bertocci as “a Shakespeare adaptation expert”. “Miranda from Stormville” marks his debut as a dramatic playwright and his long-awaited return to the work of the Bard.

Random Access Theatre reclaims and re-imagines works of the past as a way to engage in modern issues, while simultaneously nurturing the development of new pieces from emerging New York City artists. Their drunken reading series, Drunk Restoration Comedy, brings classical texts and texts made classical to sold out crowds in the West Village every month. They return to IRT for a second time after performing herSTORY, a series of programming examining the women who changed the face of theatre, last fall.