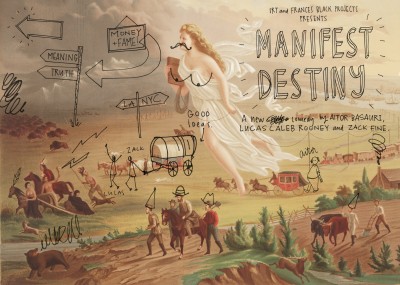 Have you ever wanted to be a better person? Or perhaps more kind and honest? Sensitive, courageous and creative? Or are you ashamed of what your life has become and want more meaning? Lucas Caleb Rooney and Zack Fine – actors, artists and humanitarians – wanted those things once too, and so they went out and found the answers. They’re going to share the answers with you. So don’t wait any longer. Come grab fate by the balls. No guts no glory. No retreat no surrender. No Carpe no Diem.

Frances Black Projects, established in 2009, produces small, spirited and unconventional theatrical experiences in New York City. Primarily, we nurture, encourage and produce theatrical artists who are playing in the world of comedy, clown and commedia dell’arte and who are challenging the relationship between audiences and performers. We also create theatrical events that bring people together to celebrate shared interests such as an annual Canada Day in NYC event. And the company is available for hire for project specific theatre management and event services. Clients include TDF, 52nd Street Project and Ice Theatre of New York. We believe love, laughter and offline human connection can heal the world, one heart and one experience at a time and we work to that end in all activities. New York theatre credits include: Commedia dell’Artichoke (currently running, Artichoke Basille’s Pizza); Standards under the Stars (2014, Mariner III); Becoming Liv Ullman a comedy by Crystal Finn (2013, Artichoke Basille’s Pizza); Walled In, a comedy with clown by Zack Fine (2011, IRT Theatre); Co-producer on A Life in the Theatre by David Mamet (2010, Broadway); Even Maybe Tammy, a commedia dell’arte by Christopher Bayes & Company (2009, The Flea). Frances Anne Strauss is the founder and lead producer. Frances served as the Director of Programs at A.R.T./New York from 2009-2014, was the Associate Managing Director at Yale Repertory Theatre & Yale Cabaret and is currently on the board of Ice Theatre of New York, the resource board of CAP21 and the Strategy Committee of Prototype Festival. A Toronto native, Frances has a B.A in Theatre Studies from University of King’s College and an M.F.A in Theatre Management from Yale School of Drama. www.francesblackprojects.com

AITOR BASAURI (writer & director) was born in Bilbao, Spain. For the past 20 years he has been teaching and performing clown all over the world. He is one of the most sought-after clown teachers in the world, regularly holding sold-out master classes in London and New York. Aitor has been staff tutor at École Philippe Gaulier Paris; taught for Cirque du Soleil/Cirque du Monde Foundation, New York Clown Theatre Festival, Celebration Barn Maine, and at universities, institutes, and festivals to students, professionals and clown doctors all over the world including Madrid, Berlin, Damascus, and Taipei. He is also a co-founder and performer in the internationally renowned clown company, SPYMONKEY. His teachers include Phiippe Gaulier, Cal McCrystal and Pierre Byland.

Manifest Destiny was produced, in part, through Kori Rushton and the IRT 3B Development Series (irttheater.org).