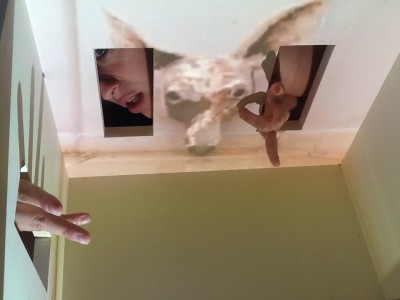 “Lifetime Supply” is a live graphic novel; a play supplemented by projected images and animation, that tells the story of Hannah, our isolated protagonist, as she collects a lifetime supply of Acai-Berry supplements in her basement to win back the heart of the man she loves.

When faced with a brutal rejection, Hannah attempts to commit suicide by swallowing all of the pills. Instead of killing her, however, the pills imbue Hannah with powers beyond her wildest imagination as the basement transforms into a jungle landscape of which Hannah is Queen. Plunging into an ocean of Acai, Hannah discovers a world beyond the dark secrets of her past.

Hannah is played by four performers; a different performer takes over each time Hannah makes a life-altering choice, exploring the idea that our choices define us. “Lifetime Supply” looks at the ways we cope with trauma by rebuilding our world from the inside out; the creation and rebirth that so often result from loss.

Sarah Todes (Playwright, Hannah 2) is the founder of NEON CAVIAR, and a graduate of NYU Tisch through Playwrights Horizons and The Atlantic Theater Company. Current projects include her web comedy series with Diana Oh, “Gwen and Mina’s Puppetopia”; an existential comedy about snack foods called “Snak Storeez” most recently performed at Cloud City, Brooklyn, a role in Korean zombie film “Simbi Zombies”, and a site specific performance of “Given The Present” directed by Jimmy Maize at the BOSSS festival. www.neoncaviar.com; www.sarahmtodes.com