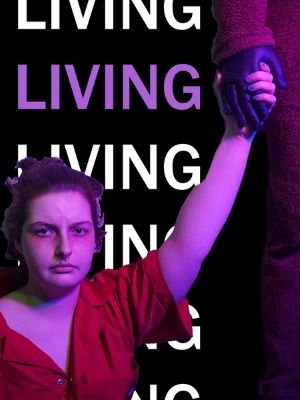 A devised theater performance exploring the lengths we’d take to silence our past, in order to move on from the one monster we can’t let go.

Charlie Chauca (he/him) is a New York based theater artist and currently a 22’ Fellow at Playwrights Horizon. Follow Charlie on Instagram, @charliechauca

Luis Feliciano (he/him) is an artist that constantly looks to expand his creative outlets as he sees his work as an opportunity to connect with the larger world around him. He has studied Acting, Writing, & Directing at Hunter College and trained in Lecoq Pedagogy with Movement Theater Studio. More recently, he has been interested in music (in particular — the guitar!) as well as long form writing. Follow the journey on Instagram, @Leezusprime.

Kristen Hoffman is a multi-disciplinary artist from South Florida and a recent graduate of Hunter College’s Theater program. Kristen has primarily worked as an actor, and over the last two years has begun exploring the range of their artistic voice through different art forms such as photography, writing, movement, and film making. Curious about the world around them, Kristen finds much excitement in challenging the idea of the mainstream, and playing with elements of chaos. Follow Kristen on Instagram, @TheKristenHoffman.

Recent works include: The Sex Myth: A Devised Play, Grow as We Grow (a photo-documentary of personal growth over the first year of the pandemic), By the Pool (a performance art documentation via video sketchbook exploring themes of religion, childhood, domestic life, family, and identity). THIS YEAR, You can catch Kristen in two new films set to release in 2022 – Julius Caesar, An adaption by The Apocalyptic Artists Ensemble, and 20 Years Later, A docu-theatre film by DocBlocProjects.