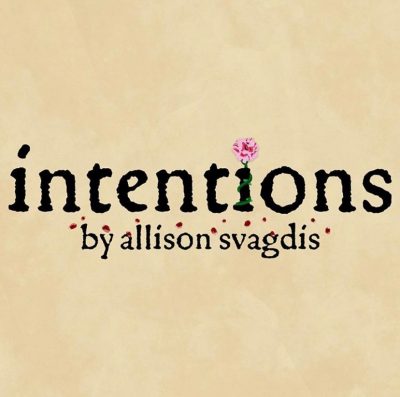 Intentions tell the story of a young woman in a cyclical pattern of past
relationships in which she unsuccessfully attempts to break out of her unhappiness, all underscored by her mounting courage to confront the sexual assault trauma of her past. As guilt, self-blame, and anger manifest into an inescapable physical adversary, Girl must reclaim her autonomy by facing her demons- inside and out.

Bios:
Allison Elaine Svagdis — Playwright, “Her”Allison Svagdis (she/her) is a New York City based playwright and actress, who holds a BFA in Acting from Point Park University. Past credits include The Scarlet Letter, Vinegar Tom and Horse Girls, and various cheeky zoom performances. She’d like to thank SheNYC,  the Intentions team, Samantha, Becky and her family for their endless support. allisonsvagdis.com @alli_laine

Avery Wood — Stage Manager
Avery is delighted to be stage managing Intentions with SheNYC. They are currently pursuing a BFA in Drama at New York University in the Playwrights Horizons studio. Recent stage management credits include Philoctetes, Time-lapse of the Universe, and (a new) Blood Wedding all of which are original plays produced in collaboration with Playwrights Horizons Theatre School. When they’re not Stage Managing, they can be found writing and directing in the nearest coffee shop. You can find them on instagram @averyawood.

Lena Banchero — Set DesignerLena Banchero is delighted to be making her New York design debut with Intentions at the SheNYC Festival. She had incredible honor of collaborating with the creator, Allison, to shape the vision of this new work. Her recent design projects include Birds and Beansprouts (New Development), In my Dreams (Carnegie Mellon) and the short film Season of Expectations. She also assisted Carey Xu on Semele (Pittsburgh Opera) and Katherine Sharpless on Into the Woods (Carnegie Mellon). She has worked as a commissioned painter and muralist and currently works in television. In her free time, she enjoys running, reading, and drawing. Find her work at lenabanchero.com, and on Instagram @lenabanchero2

Annie Nguyen — Sound DesignerAnnie Nguyen is an undergraduate sophomore at Carnegie Mellon School of Drama studying Sound Design and Dramaturgy. She calls Houston, Texas home and is grateful for this opportunity to ease back into art-making.

Allie Re — “Girl”Allie Re is thrilled to be making her Off-Broadway and New York theatre debut! Recent credits include Joan in BURDEN OF PROOF (Exit Left).  BFA Musical Theatre from the University of Michigan. Big thank you to SheNYC and the INTENTIONS Team for making this first in-person theatrical experience a lovely one! @allierebae

Max Johnson — “A”Max Johnson is a working actor, teaching artist, and deviser based in Washington, DC. He recently appeared in the premier production of Serious Adverse Effects in Baltimore and is excited to be working with such a wonderful company and team in Intentions. More information about Max can be found at his website: maxjohnsonactor.com

Drew Bos — “B/C/D”Drew (he/him) is currently studying at Carnegie Mellon University, where he will be graduating in 2023 with a degree in Acting and Business Administration. He was most recently seen in Bess Wohl’s Small Mouth Sounds with Southern Plains Productions, which was among the first unmasked productions in Oklahoma City in 2021. This is his professional New York theatre debut, and he could not be more honored to be a part of the cast of Intentions!