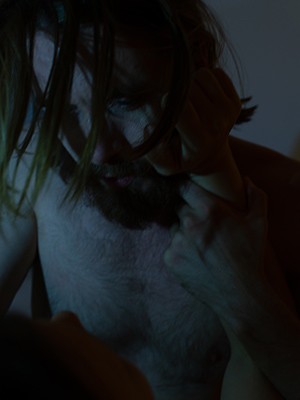 When a manic episode prompts a struggling artist to create a YouTube Live persona and disappear into Times Square for four days, he emerges with a primer on how to survive Late Capitalism.

Hunger specifies theater making as an act of labor, and examines the collective reimagining of labor in our digital fame economy.

Artist’s Statement: I am exploring the work of Knut Hamsun, whose extraordinary novel Hunger shares my assumption that artistic endeavor is a means of survival. Hamsun and I believe that art making is a high wire act.

My production of Hunger is a schizoanalysis of Hamsun after Deleuze and Guattari. I got hungry to superimpose that analysis onto the contemporary mode of celebrity guru status, i.e. for everything that is a job, there is someone on the internet who plays at that job as a performance for extra cash.

William Hand is the co-founder of The How, an international performance ensemble in NYC. His most recent NYC productions include Jon Fosse’s I Am the Wind at Unruly Arts Collective and Vandals at The Tank, devised by The How. In San Francisco Will was the impresario behind the acclaimed theater company, Do It Live, premiering emergent contemporary international playwrights. He is starring in an upcoming feature film directed by Jay Alvarez and produced by the Russo Brothers (Avenger’s: Endgame), called Something’s More Than One Thing. www.williamryanhand.com