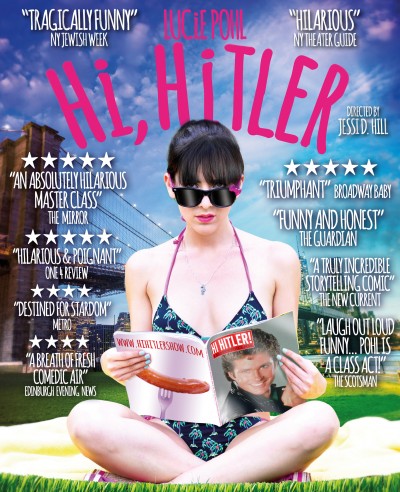 Fresh off the heels of a smash hit, sold out Edinburgh Fringe debut, a debut on London’s West End and a sold-out off-Broadway preview run at 59E59 , Lucie Pohl brings her 5 star show Hi, Hitler back to New York to IRT. Meet a German-Jew, who grows up in a wild family of artists, is fascinated by der Fuhrer from age four and uprooted from Hamburg to NYC at eight. As Bertolt Brecht’s real-life niece, Lucie yearns for normalcy, but being different seems to run in her bloodline and escaping her inherited high-drama-destiny might just be impossible. A pinch of Hitler, a cup of hip hop and a dash of Hasselhoff.

Made possible with the generous support of NYFA

Lucie Pohl is a German.born NYC raised actor, comedian, writer and solo show performer. Her solo shows Hi, Hitler and Cry Me A Liver have been performed all over the East Coast, the West End in London and the Edinburg Fringe Festival to great critical acclaim. Film: Magi (J-Plan), Not Fade Away (Paramount Vantage), El Cielo Es Azul (Vox3 Films) a.o.. Theatre: Three Graces (Immigrant’s Theater Project/3-LD), Alma Mahler: Widow of the 4 Arts (The Los Angeles Theatre), Vocal Migrations (LaMaMa) MFA in Acting from the University of the Arts in Berlin. www.luciepohl.com

Matt Otto is a Composer and Sound Designer based in New York. His recent credits are Square Peg Round Hole for Tectonic Theatre Project (NYC), Wink and Tranquil for TerraNOVA (NYC), and Orestes for Columbia University (NYC) Other regional credits include Stones in His Pockets at Yale Rep (CT), Of Ogres Retold and Secret in the Wings for the Yale Summer Cabaret (CT), Clybourne Park and the world premiere of K of D at Woolly Mammoth Theatre Company (DC), Four of Us at Theatre J (DC), CharloAe’s Web at Adventure Theatre (MD), and Johnny Meister and the Stitch with Solas Nua (DC), which earned Matt a Helen Hayes nominaOon in Outstanding Sound Design. Ma# received his BFA from Boston University and his MFA from the Yale School of Drama. More of Ma#’s work can be found at www.mattottosound.com.

★★★★★ “An absolutely hilarious master class.” – The Daily Mirror
★★★★★ “Hilarious and poignant.” –One4Review
★★★★★ “Like a Tasmanian devil-chameleon hybrid Pohl is a master of her own unique craft.” –Broadway Baby
★★★★ “A fresh breath of comedic air.” –Edinburgh Evening News
★★★★ “Destined for stardom.” –Metro
“Hilarious and honest.” – The Guardian
“Laugh out loud funny…Pohl is a class act!” – The Scotsman
“A truly incredible storytelling comic.” –The New Current