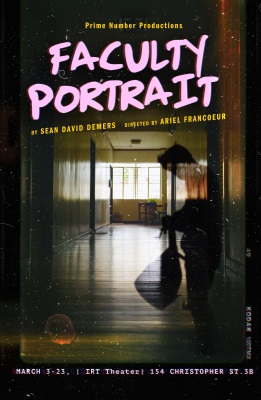 A year after a school shooting claimed the life of his wife, Mr. Y finds himself teaching in the same classroom where the tragedy occurred. As he is interviewed for the school yearbook, Mr. Y revisits the true horrors of the shooting with three students tied to the event. As their memories flash back to the shooting and the events leading up to it, their shared guilt is in turns heightened and assuaged until they accept the mistakes of the past.

Ariel Francoeur is an actor and a director of new works. MegJoBethAmy & Louisa, a play she devised and directed, recently ran in NYC, LA, and DC and will premier regionally this January at Southwest Shakespeare in Arizona. In the New York area, her work has been seen at the Park Avenue Armory Studios, Atlantic Stage 2, Plaxall Gallery, Dixon Place, Center at West Park, Alchemical Lab, Samuel French OOB Festival, the Estrogenius Festival, Hartford Opera Theater, and many others. As an actor, recent roles include Olivia in Twelfth Night (Red Monkey Theater Group), Lady Macbeth in Macbeth (Red Monkey Theater Group), Captain Izabel Hicks in the post-apocalyptic play Shelter (Otherworld Theater in Chicago), and Clytemnestra in Iphigenia in Aulis (SpiritFox Productions). For five years she was the Producing Artistic Director of The Navigators, a Feminist Sci-Fi Theater Company. She is also married to the writer of this show. MFA Directing, University of Iowa.