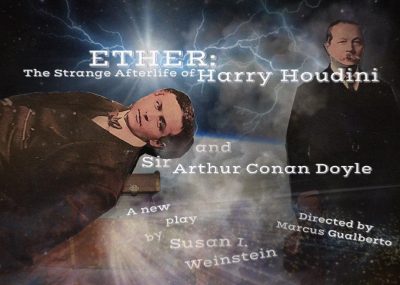 ETHER is a play within a play, a story told with the aid of projections, puppetry, and stage magic. Doyle and Houdini’s afterlife is a continuation of a passionate personal war about the nature of life and death. Yet their worlds are contained within the afterlife–our present in abstracted media. Their wives, Bess and Lady Doyle, are aware of this, yet tethered to their husband’s worlds. They join forces to resolve the bitter conflict so all can  move on. The journey starts with the origins of  Houdini’s persona, his escapes and Doyle’s vocation and revelations. Together they investigate mediums, famous and infamous; Mr. Powell, Margery, Eva C and even Lady Doyle. Each instance they emerge with dramatically opposite narratives.  As evidence mounts up. Subjective and objective truths erupt in a transcendent conclusion.

Susan I. Weinstein‘s plays have been produced by A.C.T., at The Harold Clurman Theater (Something About That Face), read or performed at The Public Theater (WhiteWalled Babes), Trinity Rep &  Truant Arts. In 2014 she  adapted Anderson’s The Little Mermaid, for a Bun Raku production. In  2018 The Wapshot Whatever: The Secret lives of Computer Programs was performed at Dixon Place, as was a staged reading of ETHER’s first act (2019). Susan is also the author of The Anarchist’s Girlfriend, Paradise Gardens, and Tales of the Mer Family Onyx (Pelekinesis 2018).

Charlie Kanev (Scenographer) is a New York based puppeteer, puppet and set designer. Past credits include; The Adventures of Maya the Bee, The Cat Who Went to Heaven, Don Cristobal- Billy Club Man, Kung- Fu, Retire for the Evening, AUDL promotional video, Pip’s Island. He is currently working on a puppetry adaptation of Hans Christian Andersen’s “The Little Mermaid.”

Lauren Elizabeth (Bess Houdini) heads her own production company, Street Cirque, which combines traditional stage and circus. Her production, BOUDICCA, was produced at Dixon Place in 2018.