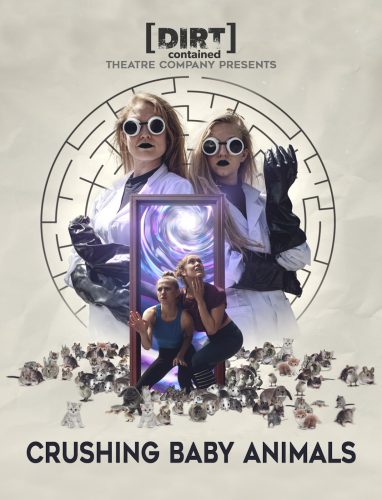 Dirt [contained] Theatre Company in association with The How

Crushing Baby Animals is a new semi-autobiographical play. After sharing a dream, Tana and Maria open up a wormhole that sucks them into a timeless ether where they come face to face with their own antagonistic Dopplegangers, the perils of the human psyche, and the absurd pitfalls of human identity.

In an ego-driven and narcissistic world, two women possess the distinct anxiety of calling themselves artists. In a last ditch effort before they throw in the proverbial towel and become accountants, the pair begin work on what they hope will be their magnum opus, an ambitious and hellish physical-theatre adaptation of Dante’s Inferno. Crushing Baby Animals follows two traumatized women growing up in the millennial age as they accidentally open a cosmic wormhole that sucks them through space, time and the human mind. This meta work takes us on an uncharted and timely adventure through parallel dimensions and personal hells, bringing us face to face with our own antagonistic Dopplegangers, the perils of the human psyche, and the absurd pitfalls of human identity. The play blends physical theatre, multimedia, improvisation, and a healthy dose of humor in a unique artistic experience.

Maria Swisher (creator/performer) studied at New York University and Strasberg Studio for Theatre and Film and graduated with a first class degree from the Liverpool Institute for Performing Arts. Her first play, The Last Eden, was produced with support from the Arts Council England under Dirt [contained] in 2011. In London she co-produced and performed with Craft Theatre Company. In 2016 she had her New York directorial debut with Garden of Delights, also at the Plaxall Gallery with Dirt [contained], which was attended by its 88 year old author, Fernando Arrabal. Acting credits include Elizabeth (When the Rain Stops Falling), Semiramis (The Chairs), Freda Caplan (Dangerous Corner), Mrs. Lovett (Sweeney Todd), Lady (Orpheus Descending) and Estelle (No Exit, Fusion Theatre).

Tana Sirois (creator/performer) graduated from The Liverpool Institute For Performing Arts, with a first class degree in Acting. Directing credits include The Last Eden (The Kazimier), Tomorrow In The Battle (An Ars Nova Fling), Alice In Wonderland (The Players’ Ring), and The Yellow Wallpaper (Edinburgh Fringe Festival). Acting highlights include Froggy (Blackbird), Tracy (Seascape With Sharks And Dancer), Nina (Stupid F*cking Bird), Alice (Painted Alice), and Lais in Garden Of Delights, which she also co-produced under Dirt [contained] Theatre Company at The Plaxall Gallery. Tana is the Performing Arts Director for Long Island City Artists Inc., and can also be found touring the country raising money for Planned Parenthood and The ACLU with the musical sketch comedy group, Katie Goodman’s Broad Comedy.

“A feat of rare cerebral physicality”
– HiLoBrow (Garden of Delights)