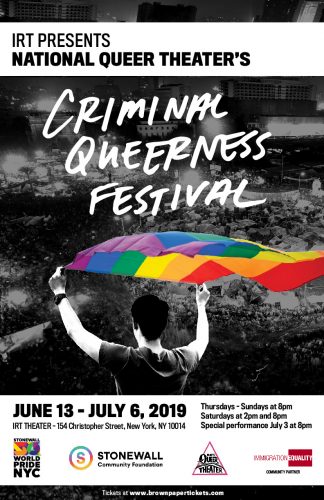 The future is ours. The theatre is ours, and yours. May it be beautiful.”
-Mojisola Adebayo

Adam A Elsayigh’s Drowning in Cairo follows the friendships of three gay men in Egypt who were arrested in the Queen Boat nightclub raid in 2001.

Fatima Maan’s Jhaanjar Di Paanwaan Chhankaar tells the story of a blind man and his intriguing new next door neighbor in Pakistan.

Chinese playwright Yilong Liu’s play Joker focuses on a Filipino gay writer and activist whose straight marriage in Hawaii is rocked by a visit from an old friend.

PRICE:
$65- Festival Pass for guaranteed seats at all four plays. Make sure to make your reservations when you purchase your pass.
$20- General Admission
$17- Youth (under 30) and students with valid ID
At IRT:154 Christopher st. NYC #3B (third floor)

According to a 2017 study from OutRight International, 72 countries continue to criminalize same-sex relationships and eight countries still apply the death penalty for LGBTQ people. And yet, queer communities throughout the Global South are organizing and building coalitions for freedom, justice, and pride. Bringing together renown queer playwrights from around the world, National Queer Theater is providing a platform for artists facing censorship, shining a light on critical stories from around the world.

The Criminal Queerness Festival challenges audiences to engage and reflect upon the status of civil rights in the United States in order to better support LGBTQ people abroad. In order to build a truly global queer community, these writers are inspiring activism and shaping our culture towards the equitable treatment of LGBTQ people around the world.

National Queer Theater is a 501(c)(3) nonprofit organization whose mission is to foster and support LGBTQ communities through social justice in the performing arts.

1.    Mainstage Productions: The National Queer Theater Mainstage produces new plays by, for, and with LGBTQ communities.