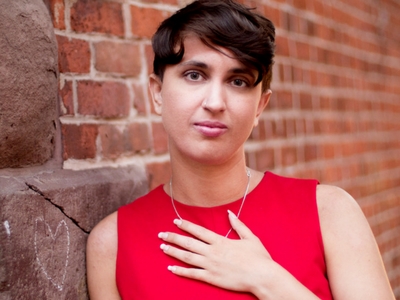 Baby Mama: One Woman’s Quest to Give Her Child to Gay People

Written and performed by Mariah MacCarthy
Directed by Sara Lyons

Sara Lyons (Director) is a director, queer and feminist performance-maker, and teaching artist creating new work across performance disciplines. Based in NYC and Pittsburgh, she seeks to explode convention in form and politic, creating work that is critically embodied around issues of gender, sexuality, and race, and engages with contemporary experiences of technology. As a director, performer, and writer her work has been presented at Ensemble Studio Theatre, HERE Arts Center, Fordham University, Culture Project, LaMaMa ETC, Dixon Place, and many more.  She has taught performance and created new work with students of all ages across New York City as well as Mexico and South Africa. Sara holds a B.A. in Theatre and Gender Studies from the University of Wisconsin-Madison; is an alum of DirectorsLabChicago and the EMERGENYC program for political performance-makers at NYU’s Hemispheric Institute; and is currently studying for her MFA as a John Wells Directing Fellow at Carnegie Mellon University.

“Sweet and boisterous…and a lot of fun, too.” -The New York Times on MacCarthy’s Mrs. Mayfield’s Fifth-Grade Class of ’93 20-Year Reunion

“Hilarious, gross, heartbreaking, courageous. All throughout, you can hear the love in her voice.”-Upworthy

“Brutally truthful, but in ways both refreshing and educational. MacCarthy never at any point loses her intimate connection with the audience. Charming and touching: lighthearted at times, heart-wrenching at others, and not to be missed.”– San Diego Reader