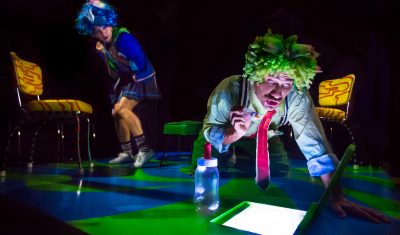 One-Eighth Theatre and The Drunkard's Wife

New Ohio Theatre and IRT Theater are proud to announce that One-Eighth Theatre and The Drunkard’s Wife will be an Archive Resident from 2017 – 2019.

Founded in 2008 by Artistic Directors Daniel Irizarry and Laura Butler Rivera, One-Eighth Theatre, is inspired by Hemingway’s Iceberg Theory – the alluring idea that some things are better left unexplained or open to interpretation. The tip of an iceberg is only one-eighth of what’s there, so much more lies beneath the surface. This idea of abstract possibilities is applied to all things One-Eighth. One-Eighth currently had a four-year long residency at INTAR Theatre. From participating in soloNOVA’s theater festival to performing at IRT, from two Mabou Mines residencies to creating an original piece at Bilkent University with Turkish actors, One-Eighth is constantly pushing theatrical boundaries. Poland, Japan, United Kingdom, Lithuania, Germany, Turkey, Romania, Korea, Puerto Rico, New York City—One-Eighth also travels the world offering workshops and ‘breaking the ice,’ sharing their theatrical pieces.

Led by Normandy Sherwood (The National Theater of the United States of America) and Craig Flanagin (God is My Co-Pilot and ½ Japanese) The Drunkard’s Wife is a no-wave mountain music band/theater troupe from Brooklyn. Their original works often incorporate raucous, no-wave inflected music and a generous, maximalist design sense. Their plays and spectacles have been seen at Rubulad (Tiny Hornets) Brick Theater (Permanent Caterpillar), New Ohio Theatre (Feather Gatherers), as well as block parties and bars and parades all over New York City. Their 2013 album, I Saw the Evil One, is available here: http://thedrunkardswife.bandcamp.com/