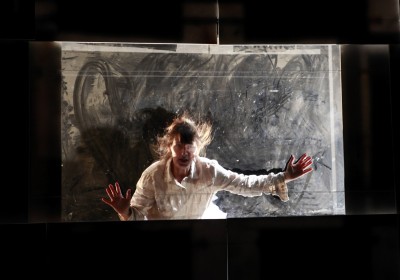 And Now Is Gone

” a pair whose theatrical acumen matches the formidability of their subject… there’s so much imagination and talent at work here that it makes me look forward with anticipation to what anecdota will be up to next.”  BACKSTAGE

anecdota is the artistic partnership of Jill A Samuels and Erica Fae, as well as a shifting ensemble of collaborators.  Creating innovative works mined from historical, visual, and physical research — we employ movement, dance, sound, song, film, video, puppetry and poetry – as each unique project demands.

TAKE WHAT IS YOURS was a Critics’ Pick in the New York Times and Backstage and received glowing notices in The New Yorker, The Huffington Post, and several other publications, as well as a nomination for the American Theater Wing’s Henry Hewes Design Award.  It was developed in residency at IRT, NYTW’s Readings at 3, New Georges, the Old American Can Factory and with the support of the Foundation for Contemporary Arts, Ms. Magazine, and the Distracted Globe Foundation.  It was the inaugural production of the New OHIO Theater, transferred off-Broadway to 59E59 Theatres, and was reprised at the Living Theater.

“… a psychological thriller about the woman’s suffrage movement… The script … is both horrifying and riveting.  The execution… positively Hitchcockian… terrifying… powerful…”  The New York Times

Jill & Erica are currently writing a mini-series for TV, and have guest-lectured together at Europe’s premier film academy, Baden-Wurttemberg in Germany.  Erica also performs on film and TV (most recently in recurring roles on HBO’s Boardwalk Empire and Doll & Em).  She also teaches at Yale School of Drama & the New School for Drama, and has just written & directed her first feature film TO KEEP THE LIGHT.  Jill’s theater and performance work has appeared in more than 60 venues & festivals, and she has recently produced five exhibitions at The Museum of Modern Art . She is currently researching and writing a series of projects for producers in the U.S. and Europe.