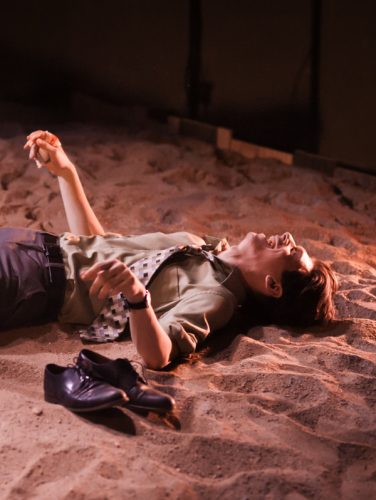 Winner of Sanguine Theatre Company’s 2018 Project Playwright Competition, Alexandria is a play about relationships that cross the deep divides of belief and conviction: what those relationships are worth, and what they cost.

In a small-town library in the deep South, two librarians maintain an unlikely close friendship, despite their many differences. But when a controversial wedding, a young queer runaway, and an ominous cyberattack come crashing through their front door, can that friendship survive?

At Sanguine’s Project Playwright Festival in January, Alexandria was chosen from over 400 submissions to receive its world premiere as part of Sanguine’s 2018 season.

“Alexandria is the third play I’ve seen produced through Project Playwright and I commend Sanguine’s innovative program and the effort they put into realizing each play. The production value and staging is consistently exceptional, and Alexandria is no exception.” –My Entertainment World

About STC
Sanguine Theatre Company discovers and produces new plays, champions the exchange of theatrical work across regions, and cultivates an active community of artists and theatregoers. By telling vital human stories, Sanguine hopes to reflect, amplify, and contribute to the narrative of our time. www.sanguinenyc.org

“Sanguine Theatre Company is really doing a great thing for emerging playwrights and for theatre goers by having events such as [Project Playwright] where our voice as the audience counts.”
– Emerging Playwright, 2013

“The play ends without answering all our questions. It’s not poor structure; it reflects life.”
–New York Critic on Jessica, winner of Project Playwright 2017 and presented at IRT

“Josh Drimmer explores what happens when one willingly revisits those feelings from the past, and the results both hit home and inspire laughter. Presented by Sanguine Theatre Company and directed by Logan Reed…lighthouse is a truly intimate experience with the souls of the characters laid bare only a few feet before you.”
– StageBuddy on the lighthouse invites the storm, winner of Project Playwright 2015