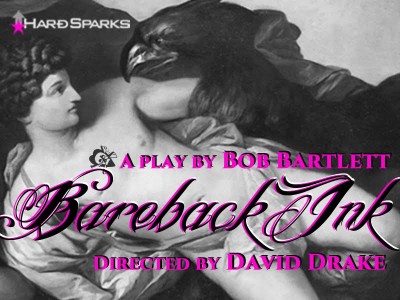 Looking down from the heavens, Zeus could not take his eyes off the boy, the most beautiful of the race of men. So the king of gods, taking the form of an eagle, descends from a fierce thunderstorm, seizes the Trojan prince and hides him among the stars…

The Rape and Abduction of Ganymede – in all its celebrated and problematic forms – has been the subject of artists, writers, and thinkers since antiquity, and remains emblematic of the treatment of generations of men and boys at the hands of powerful and sometimes corrupt systems. In Bob Bartlett’s modern reimagining of the myth, directed by Obie-winner David Drake and featuring NYIT Award nominees J.Stephen Brantley and Todd Flaherty, Ganymede confronts the complexity of his iconography and comes of age while receiving a large tattoo.

DAVID DRAKE (Director) is an Obie Award winner for his long-running solo show The Night Larry Kramer Kissed Me. He recently helmed J.Stephen Brantley’s The Jamb, as well as his acclaimed musical memoir Chicken-Fried Ciccone for the 2014 FRIGID Festival (which received two NYIT Award nominations). David has twice been a directing fellow at Sundance Theater Lab, as well as residencies at DTW and the Kimmel Center. He developed and directed The Be(a)st of Taylor Mac (New York Times, TONY, New Yorker Critic’s picks) which played Under the Radar at The Public before an extensive global tour, as well as the world premiere of Mac’s Obie Award-winning epic The Lily’s Revenge at HERE. David has been the writer and director of Migguel Anggelo’s Another Son of Venezuela (NY Magazine Critic’s Pick) at Joes’s Pub and on international tour.