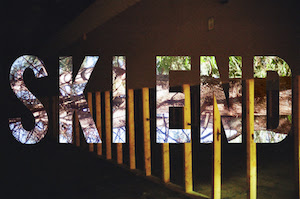 IN RESIDENCE: 2015- 2017 Resident Company
New Ohio Theatre and and Piehole present
An Archive Residency Production, in collaboration with New Ohio and IRT Theater

In Piehole’s Ski End, an abandoned ski shop becomes the center of the universe. A group of 30-whatever urbanites finds itself stuck in a flood-damaged building with a makeshift skate ramp, dead birds, and the tattered banner of a final blowout sale. From these clues they ritualistically reanimate a bygone world of Ski, until they incite a cosmic force. Rising from the ruins of economic and environmental dread, Piehole’s Ski End examines chronic patterns of apocalyptic despair and what it takes to face The Sublime.

PIEHOLE investigates the process of collaboration and collective authorship to create live events. Driven by an ongoing pursuit of surprise, delight and beauty in unexpected places, Piehole encourages agency in one’s thinking, perceiving, and feeling, as well as an expanded sense of potential realities. Since 2008, Piehole’s work has performed in theaters, galleries, and hotel rooms in New York, Philadelphia, and Prague, and has been praised for its “beauty and gratifying weirdness” (The New York Times).

SKI END was developed through the Archive Residency, a program of New Ohio Theatre and IRT Theater.

The Archive Residency is generously supported, in part, with funds from The NYC Department of Cultural Affairs, The National Endowment for the Arts, The Nancy Quinn Fund, a project of ART-NY, and the Mary Duke Biddle Foundation.