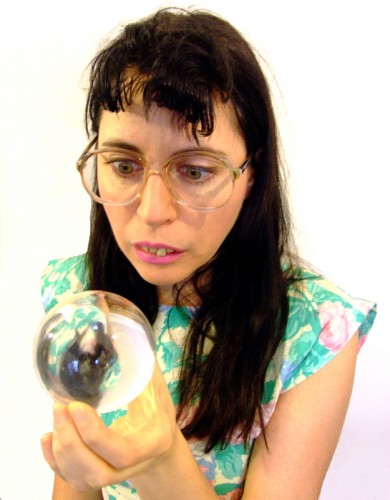 Set in the late 1980’s, Darkling follows Trinity, a thirteen-year-old wanna-be Goth girl from a suburban, affluent family who worships an older sister who escapes from a lock-up boarding school for troubled teens.  After a failed first romance, Trinity journeys to find her fugitive sister, who is living on the streets. Trinity makes many life choices based on the idealized vision she has of her older sister, but when she finally finds her, Trinity discovers her idol isn’t the person she thought she was.  When Trinity learns the truth about her sister, she must choose: follow her role model into fantasy and insanity, or stay in the world and fight to make an impact. But is making an impact even possible?

Katzberg is acutely aware of the strange contradictions in the theater world and she milks them to great effect, adding to an already hilarious physical performance.
— Theatermania

Kim Katzberg (writer/performer) is a NYC based actor, writer and teaching artist. Of her Fall, 2011 breakout solo show Penetrating the Space, the NY Times wrote, “Penetrating the Space has a glowing, vulnerable, haunting center.” Penetrating the Space was nominated for two 2012 NYIT Awards and ran at HERE Arts Center in repertory with Tom X. Chao’s Callous Cad.  Prior to that, Penetrating… was developed at Dixon Place through two engagements: as an official selection of the 2010 HOT! Festival and in a featured run as a 2010 Artist-In-Residence. Most recently, Katzberg performed a short excerpt from her new solo show Darkling in CATCH Performance Series at The Bushwick Starr. Off-Broadway productions include Alison in Richard and Anne directed by Anthony Nelson at the Arclight Theatre and Benvolio in Romeo and Juliet directed by Tony Speciale at Classic Stage Company. Katzberg holds a BFA in Theater, NYU/Experimental Theatre Wing and a MFA in Acting, Columbia University. Kim Katzberg is also a teaching artist with Opening Act.